French overseas territories vote to remain close to Paris | Europe | News and current affairs from around the continent | DW | 11.01.2010

Residents of two of France’s overseas territories have voted against greater autonomy from Paris. The referendum decision comes despite recent anger over economic problems. 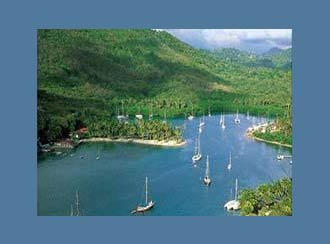 Martinique, like French Guiana, is a part of France and the EU

Voters in the overseas departments of Martinique and French Guiana have rejected a proposal for more autonomy from France.

In the referendum held on Sunday, 79.9 percent of the electorate in Martinique voted against the proposal. In Guiana, 69.8 percent of those who cast a ballot rejected it.

Martinique, a Caribbean island, and French Guiana, a region in the northeast of South America, are fully-fledged parts of both France and the European Union.

However, both regions suffer from economic problems including unemployment – despite economic support from Paris.

A year ago, French overseas departments in the Caribbean – including Martinique – were hit by strikes over low wages and high prices. The referendum on Sunday was held to give people a chance to have a greater say in their own affairs, although not complete independence.

Around 300,000 people were eligible to vote in Martinique, with a turnout of 55 per cent. In Guiana, where there are about 70,000 registered voters, 48 percent participated.

Warnings from "No" camp

"No" campaigners had warned that France might try to relinquish its responsibilities to overseas departments, where social benefits are similar to those in France.

Martinique Senator Claude Lise, who was in favor of a "yes" vote, said it had been "a vote of panic."

"Martinique and Guiana have missed a major turn in their history and scuttled a proposed reform that could have helped them build their future," he said.

Sarkozy travels to Guadeloupe and Martinique

French President Nicolas Sarkozy visits the Caribbean to try to repair ties with the French overseas territories that were hit by violent strikes earlier this year. (26.06.2009)

What do Kazakhstan, Israel and the north-eastern corner of South America have in common? Some people count them as European. So why do other countries fail to make the grade? (31.08.2008)

Voting started in overseas territories Saturday for France's hotly contested presidential election that heralds the transfer of power to a new generation of political leaders. (21.04.2007)