France's Constitutional Council says the country's proposed carbon tax is illegal. This is being seen as a severe blow to French President Nicolas Sarkozy's plans to fight climate change. 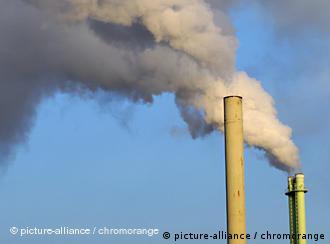 The council said the tax had too many exemptions

France's Constitutional Council has struck down a carbon tax that was meant to take effect on January 1. The council, which is charged with ensuring the constitutionality of French legislation, said too many polluters were exempted in the measure and the tax burden was not fairly distributed.

It was estimated that 93 percent of industrial emissions, including the emissions of more than 1,000 of France's top polluting industrial sites, would be exempt from the tax, which would have charged 17 euros per ton of emitted carbon dioxide.

French President Nicolas Sarkozy has argued the tax is necessary to combat climate change and reduce the country's dependence on oil.

Observers say the council's ruling is a severe blow to both Sarkozy's environmental plan and as France's budget for 2010. The government now has to find a way to come up with about 4.1 billion euros in revenue that was expected to be generated the tax.

EU split over how far to push carbon reduction

While the climate conference in Copenhagen enters its second day, an EU meeting in Brussels has revealed discord on Europe's emissions targets. Britain wants a 30 percent cut in greenhouse gases. Other countries don't. (08.12.2009)