A team of energy experts, engineers and architects wants to free the French of their nuclear dependence by 2050. In an election year, the appeal to energy austerity is attracting attention from left to right. 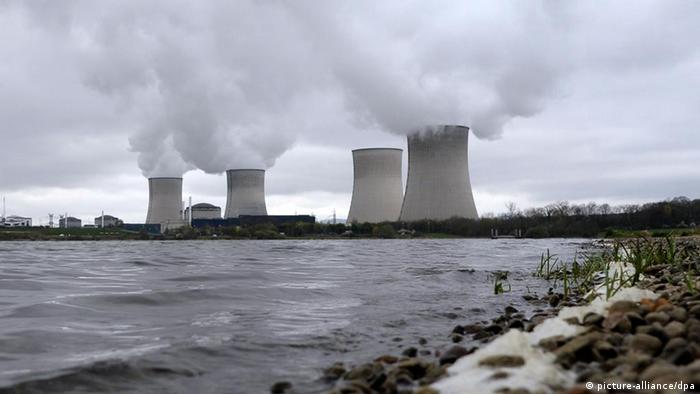 A campaign to reduce energy waste is catching on in France

It's all in the name.

Since last autumn, the French organization negaWatt has been staging its own Tour de France to gather support for its vision of how the country should power its economy in the future.

The idea comes from American environmentalist Amory Lovins, who coined the term negawatt in 1989. It describes a unit of energy saved through conservation or efficiency.

In France, which gets more than three quarters of its electricity from nuclear power, the appeal to efficiency has been winning approval ever since Japan's Fukushima disaster of March 2011.

"Ours is not an anti-nuclear religion," says Thierry Salomon, vice president of negaWatt. "But nuclear energy does not represent a sustainable form of energy production."

The events of last year have given negaWatt its own burst of energy. 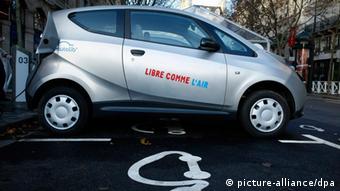 NegaWatt says France could cut its energy needs in half

On the one hand, it lists sources of energy. On the other, energy requirements – things like heating, transport and electricity.

The first graphic presents the current situation in France. Thick bars on graph represent its most important sources of energy – uranium, oil, gas. The bars for renewable sources are much thinner.

Renewables meet around 6 percent of France's total energy needs, compared to 40 percent for nuclear and 33 percent for oil.

France consumes 1927 terawatt hours of energy, but according to negaWatt's calculations, the country could cut this in half to 849 terawatt hours by 2050.

In this picture, the thick bars have disappeared and the most significant energy sources have turned to biomass, biogas and wind energy. There is no bar for nuclear. 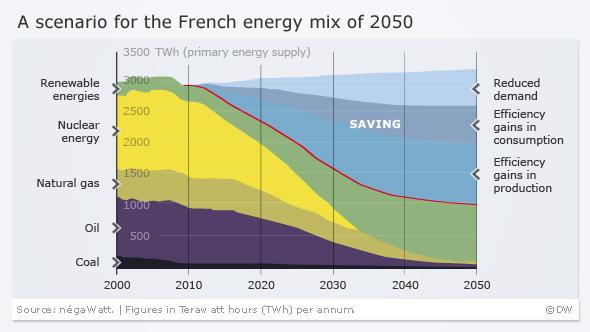 The end of uranium

"That means that if you give each an average lifespan of 40 years, French nuclear energy will hit a wall by 2027."

Marignac says that if France doesn't build any new reactors, it will have to phase out its current fleet within six years of 2027.

"It's not possible to do it any sooner because the renewables will need time to get going, but we can't wait any longer because of safety issues" says Marignac.

Nuclear energy is taboo in France.

Late last year France's opposition Socialists and Greens agreed to campaign together to reverse the country's dependence on nuclear energy.

They promise a common platform to reduce nuclear energy from 75 percent to 50 percent of France's electricity needs by 2025.

The deal ends France's political consensus on nuclear power and has been strongly attacked by President Sarkozy's administration.

It could also prove tricky to apply as demand for energy in France is growing. This is the front that negawatt wants to attack.

That includes improving heat insulation in buildings, switching to electric cars, and getting urban planners to find ways to reduce distances between people's homes and their work places.

"Our slogan 'more moderation' is a call to the nation to rethink its behavior," Jedliczka says. 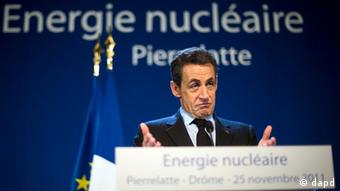 Jedliczka says Germany's decision to commit to a nuclear phase-out could serve as an example for France.

He says there is a lot to be learnt about generating energy from synthetically produced methane gas.

"The Germans have a head-start in operational areas," says Jedliczka, "their political context is different."

But the mood in France may be changing too. NegaWatt's campaign has been drawing interest from the left and right.

While the business magazine Challenge has said it believes negaWatt presents a "new way forward," headlines like "Earthquake in the energy sector" and "This way for the nuclear phase-out" are ensuring energy will be a deciding factor in the upcoming French presidential elections.

A French government body on nuclear safety has strongly recommended improvements to the country's nuclear facilities to better protect against natural disasters. But it stressed that France's nuclear reactors are safe. (17.11.2011)

An explosion at a nuclear site in France that killed one person and injured four more has not caused a leak or radioactive contamination, according to authorities. The environment minister visited the site. (12.09.2011)

In the six months since the Fukushima disaster, a global survey has detected mounting opposition to nuclear energy, especially in Asia. Yet Germany remains the only country to abandon the technology to date. (09.09.2011)