At least one person has died and 14 others were injured when a freight train transporting highly toxic tanks of chemicals derailed near the Belgium town of Ghent. Two similar accidents occurred last year. 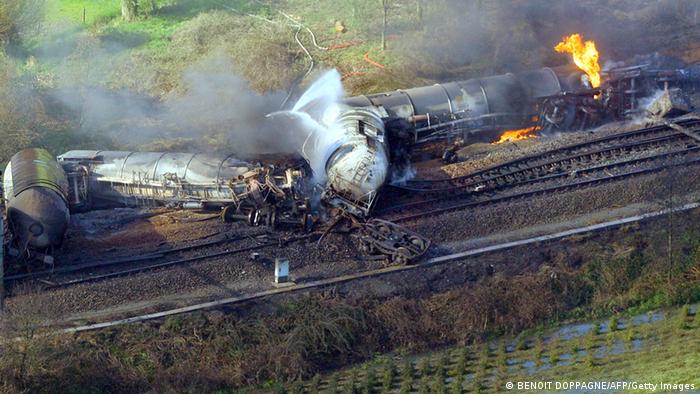 Jan Briers, governor of eastern Flanders, told the Belga news agency that a fire broke out after the derailment, which occurred between the town of Schellebelle and Wetteren around 2:00 a.m. (0000 GMT) on Saturday.

Authorities, he added, were forced to evacuate nearly 300 people living within 500 meters (546 yards) of the accident site, when it was feared chemical fumes from the explosions might spread.

Six of the train's 13 carriages derailed, and two were turned on their side, according to Infrabel, the company responsible for Belgium's rail network.

Interior Minister Joelle Milquet said toxic fumes from the highly flammable chemicals were to blame for 14 people needing hospitalization, adding that the victims were living well away from where the accident occurred.

"There are two problems," she said, "there are the cars that derailed with this chemical product and which are ablaze. So there, there is a problem of poisoning linked to the smoke. The fire is under control but it will burn a while longer."

"But there is also another reaction," the minister added, "since some of the chemical product went to the drains and caused a kind of chemical reaction with gases that are toxic and escaped into certain streets beyond the perimeter that had already been evacuated due to the fire."

Cause of accident unknown

In order to prevent the release of further toxic chemicals, firefighters were forced to let the carriages burn out in a controlled manner.

The cause of the accident is yet to be determined, but the cars derailed as the train changed tracks, and it is thought the train may have been travelling too fast at the time.

Rail services have been disrupted between Schellebelle and Wetteren with delays expected to last at least two days.