Freddie Mercury, lead singer of rock band Queen, died on November 24, 1991, of AIDS-related complications. He fought until the bitter end to keep recording his music, and 25 years later his music lives on.

There are few icons in popular music like Freddie Mercury. With his intricate gestures and his incredible voice, Mercury created a new level of genre-bending (and gender-bending) entertainment.

He may have learned a lesson or two in terms of androgyny from his contemporary, David Bowie, but Mercury didn't in the least come across as reserved or remote in the way that some perceived Bowie's act. Instead, Mercury loved to take both gender roles to grotesque extremes, all carried by his powerful and unparalleled vocals. With its four-octave range, it didn't even fade in the presence of Spanish soprano Montserrat Caballé during their duet, "Barcelona."

But Mercury's rise to fame was chiefly thanks to his charismatic role as the frontman of the rock band Queen. Along with Brian May (on guitar and vocals), Roger Taylor (on drums and vocals) and John Deacon (on bass guitar), the British group wrote some of the greatest hits in pop music history, performing sold-out gigs around the world. 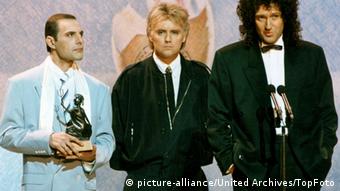 Mercury, at left, had notably changed by the time he made his last public appearance at the 1990 Brit Awards

Freddie Mercury's stage presence was equally unique. He had no issues with standing in front of more than 70,000 people at London's Wembley Stadium, singing, flirting and toying with every member of the audience. Often he would crown himself at the end of his performances, as king - or queen - of rock. Mercury's charm was carried by his ability to not take himself too seriously.

Whether he was mocking the audience or mocking himself, Mercury managed to instill humor and timeless sex-appeal in almost every public appearance.

"If people were to stop buying our records I'd have to become a pole dancer and strip to the music that we wrote," he once said.

Rock group Queen rebuffs Trump's use of 'We Are the Champions'

Queen has become the latest in a line of rock bands to complain about the use of their songs by politicians. Written by the late, lead singer Freddie Mercury, it is one of Queen's most recognisable anthems. (20.07.2016)

When Freddie Mercury died in 1991, it looked like Queen's performing days were over. But the band has come back with a new face at the front mic: American Idol star Adam Lambert. Now Queen 2.0 is taking Europe by storm. (13.01.2015)

But there was a fine line of separation between his public persona and his private life, which Mercury defended to his last moments. He never spoke publicly about his sexuality.

A reporter in Rio de Janeiro asked Mercury in 1985 whether the hit single "I Want to Break Free" had anything to do with the liberation of gay men, to which he replied that the song had been written by his band colleague John Deacon.

"That man is happily married with four children. I have no clue where you get these ideas," he told the reporter.

But rumors about Mercury's homosexuality continued for years. With the emergence of the AIDS virus during the 1980s, questions about his secret lifestyle increased.

As the virus spread like wildfire in the gay scene, tabloid newspapers started to question Mercury's health as well, as his appearance began to shift. Later, it was revealed that Mercury had had several same-sex relationships at a time.

There are no details about when Mercury contracted HIV - nor about when he was officially diagnosed. His friends and bandmates have said that he didn't want to talk about it; he only shared details little by little with those who mattered the most to him. The deterioration of his health eventually prevented Mercury from going on tour - something he used to love. 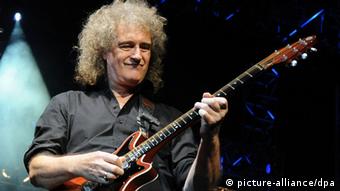 Bandmate Brian May said that while everyone knew Mercury was ill, no one spoke about it

"For a while, we honestly didn't know what was going on with him," May once said. "It was as if there was some unwritten law that we were not to talk about it."

Mercury lost so much weight that by the time he made his last public appearance at the 1990 Brit Awards, when Queen received an honorary award for "Outstanding Contribution to Music," everyone could tell that he was ill. Mercury tried to hide his gaunt appearance behind makeup that night, looking like a ghost.

Mercury only shared the truth with Queen's other band members less than a year before his death. Determined to keep working, Mercury convinced the band to record the album "Innuendo" in his final months. May explained that the band recorded the album knowing full well that there wasn't much time left.

"He suffered terribly. But he didn't show it. I never heard him complain," May later said.

Mercury also recorded his final music video during that time, for the song "These Are The Days Of Our Lives." He wanted to prove that he could still muster up the discipline to work hard up until his death.

On November 23, 1991, Mercury released a press statement, admitting that he had indeed been suffering from AIDS. He died just one day later, at the age of 45.

Freddie Mercury has been dead for more than a quarter century, but his hits - including "Bohemian Rhapsody," "Killer Queen," "I Want to Break Free," "Don't Stop Me Now," "Crazy Little Thing Called Love" and "We Are the Champions" - continue to fascinate new generations of fans.