Seven western Balkan nations aspiring to join the EU had their hopes dampened by French and German officials reluctant to see the 27-member bloc expanding in times of unfinished inner reforms and global economic crisis. 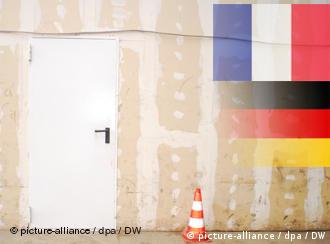 When will the EU open its doors to Balkan nations and Turkey?

"There will be no enlargement if there is no Lisbon Treaty," said French Foreign Minister Bernard Kouchner on Saturday, March 28, during an informal meeting of EU foreign ministers in the Czech Republic.

That position was echoed by German foreign ministry officials, who said: "We will not be in a position to accept new member states in the EU without the Lisbon Treaty." 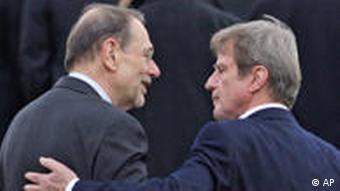 France's Bernard Kouchner, right, seem to be turning his back to the Balkans

These comments came after German Chancellor Angela Merkel and her conservative Christian Democratic Union (CDU) recently made calls for a pause in the EU's expansion part of their platform for the upcoming European elections in June.

According to CDU, "the consolidation of the identity and institutions of the European Union" must have "precedence over further EU accessions."

The Lisbon Treaty is designed to improve the bloc's decision-making process, taking into account its 2004 and 2007 "Big Bang" enlargements, which saw a total of 12 new countries join the EU.

However, its enactment has been stalled by an Irish no vote in a referendum last year and by this week's collapse of the Czech government before it was able to complete the ratification process.

Ireland is now expected to hold a fresh referendum in October, while acting Czech Foreign Minister Karel Schwarzenberg said he was confident that the Czech Senate would ratify the treaty "in due time."

Saturday's comments by top diplomats from France and Germany, while not new, were all the more significant as they came during an EU meeting with ministers from seven aspiring members from the Western Balkans -- Albania, Croatia, Bosnia-Herzegovina, Macedonia, Montenegro, Serbia and Kosovo -- and officials from Turkey. 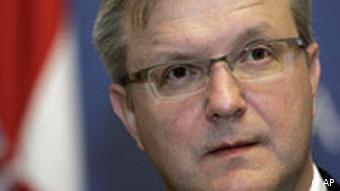 German officials said their country's opposition to further enlargement in the absence of the Lisbon Treaty also applied to Croatia, which is hoping to end its membership talks this year, and become the EU's 28th member state soon afterwards.

This position was not shared by the EU's enlargement commissioner, Olli Rehn.

While acknowledging the need to have the Lisbon Treaty approved so as to make the EU "more effective," Rehn said enlargement should not be made "a scapegoat for other ills (that) it is not responsible for."

Rehn has been spending most of his time trying to advance the case for the western Balkans' EU membership, mediating for instance in a border dispute between Croatia and EU member Slovenia.

Speaking at the meeting in southern Bohemia, Slovenian Foreign Minister Samuel Zbogar said he could see "movement" on the EU front, hailing the mediating role being played by Rehn. 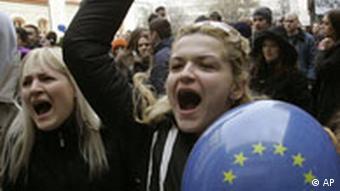 "I very much hope that we will confirm that the doors of Europe are open ... and that the peoples of the Western Balkans can look forward to their European future," Jeremic said.

In a statement, the Czech presidency of the EU said participants at the meeting in Bohemia had "reconfirmed the European perspective of the western Balkans."

"We need to continue our policy of stabilization, whose other name is enlargement," Rehn said.

The Czech presidency also vowed to show solidarity with the region in the face of the current economic crisis. 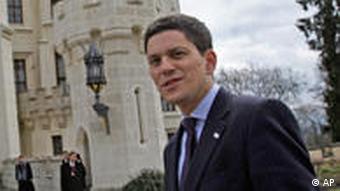 David Miliband is in favor of widening the European Union

Despite German and French reservations, some EU ministers sought to downplay fears that the current economic crisis was dampening enthusiasm for taking the relatively poor neighbours into the European club.

"I think we have got to make the argument that the European Union should learn from its history and its history is that wider makes stronger," said British Foreign Secretary David Miliband.

"If we were to slam the door in their face, not that I say that that will happen, it will have devastating consequences for the region," he warned. 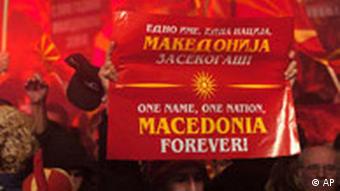 Macedonians are still fighting for the name of their country

Macedonia, which was granted candidacy status back in 2005, has been unable to advance the membership process because of a long-standing dispute with neighboring Greece over its name.

And the former Serbian province of Kosovo faces additional opposition from EU countries like Spain, which do not even recognize it as an independent state.

At the meeting of EU foreign ministers in Hluboka Castle, a 13th-century mansion in southern Bohemia that once belonged to Minister Schwarzenberg's family, British Foreign Minister David Miliband insisted that "the door to the EU has not been closed."

Lithuania's Vygaudas Usackas, however, called on all candidate countries "to be very patient."

The Czech political collapse has not only thrown the country’s politics into disarray, but also disrupted EU affairs. The Czechs currently hold the EU presidency and it is unclear how this will affect the 27-nation bloc. (25.03.2009)

European Union leaders rejected calls by the US to increase the size of their economic recovery plan as part of international efforts to avert a global recession. Instead the EU will spend money on energy security. (20.03.2009)

The Council of the European Union has agreed to extend its suspension of sanctions against Belarus, including a visa ban for top officials. But concerns linger whether the regime will improve its human rights record. (17.03.2009)