France's far-right National Front Party has won a local by-election. The result reflects the rising popularity of the anti-immigrant, anti-EU party ahead of next year's municipal and European elections. 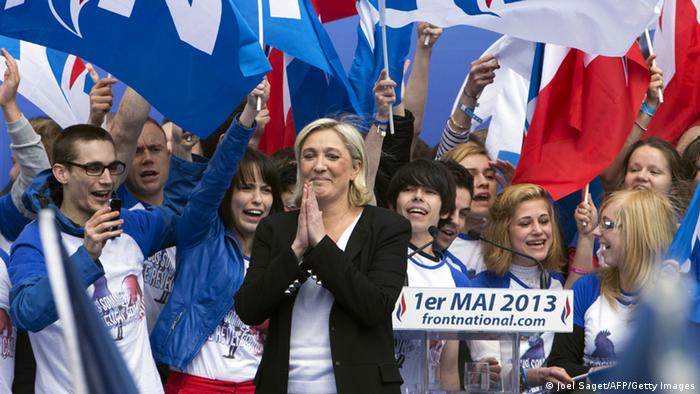 National Front (FN) candidate Laurent Lopez has won the cantonal by-election in Brignoles, a town in the south of France. Lopez won with 53.9 percent of vote against 46.1 percent for the center-right Union for a Popular Movement party (UMP) candidate Catherine Delzers, according to a final tally released by the local prefecture.

"This victory with an unambiguous score and a record turnout demonstrated that the National Front is a unifying party," Lopez said after the results were announced.

Sunday's election was the third attempt in three years to elect a district representative for Brignoles, which has a high population of North African-origin families in its center.

President Francois Hollande's Socialists did not field their own candidate in the first round. They backed a Communist ally who failed to make it into Sunday's run-off. They then called on supporters to back the UMP.

Lopez's victory in Brignoles, near the port town of Toulon, came three days after a survey published in French weekly Le Nouvel Observateur described the anti-EU FN as the country's main political force. The survey forecast a 24 percent share of the vote in the May 2014 elections for the European Parliament. It placed the FN ahead of both the ruling Socialist Party and the UMP union which took former President Nicolas Sarkozy to power.

"For the first time in a poll on voting intentions in an election of a national character, the FN is clearly ahead of both the [ruling] Socialist Party and the UMP," the main opposition party, the polling organization Ifop said in the article.

Since taking over as FN leader in 2011, Marine Le Pen (photo above) has tried to broaden the appeal of the party. Its image was closely linked to the personality of her 85-year-old father, who has convictions for incitement to racial hatred and for Holocaust denial.