France and Italy share strong ties with Libya′s Gadhafi | Europe | News and current affairs from around the continent | DW | 22.02.2011

France and Italy have condemned Libya's violent repression of anti-regime protests, but both European nations have a lot at stake when it comes to the oil-rich country. DW takes a look at relations between the nations. 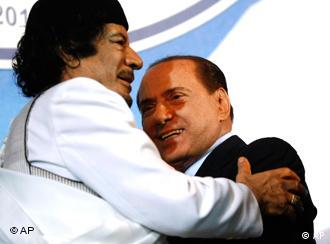 Italy and France are nervously eyeing developments in Libya

As the Libyan regime comes under pressure, so too do the country's northern partners. Both the French and Italian governments share lucrative economic ties with Libya.

The two European Union members have come out against Libyan leader Moammar Gadhafi's use of force to crush protests, with French President Nicolas Sarkozy calling for an "immediate halt" to the violence.

Yet questions remain in both countries as to how unrest - and a potential toppling of Gadhafi's regime - could affect national interests.

Rome's relations with Tripoli are primarily influenced by Italy's dependence Libya to stem illegal immigration from Africa. The two countries' coast guards cooperate in detaining undocumented migrants in the Mediterranean and sending them back to their countries of origin. 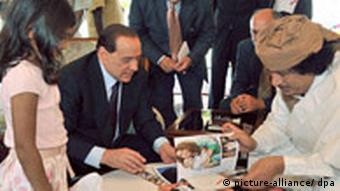 Berlusconi signed a friendship treaty with Gadhafi in 2008

Libya's role in keeping out unwanted migrants is worth as much as $5 billion (3.7 billion euros) to Italy, which the latter pledged to invest in Libya's infrastructure over the next 25 years as "reparations" for its bloody 1911-43 colonial rule.

The funds had been earmarked to construct, among other things, a coastline highway in the North African country.

The Italo-Libyan anti-immigration practices agreed to by Gadhafi and Italian Prime Minister Silvio Berlusconi in their 2008 friendship treaty, violate the United Nations Convention Relating to the Status of Refugees. Yet so far only rights groups have raised protest.

Italian President Giorgio Napolitano has defended Gadhafi's questionable human rights record, saying he had heard Gadhafi "speak with great moderation and a sense of duty when it comes to the most difficult problems facing the African continent."

Libya's friendship has also brought security to Italy's energy supply, and Italian energy group ENI has a large presence in the oil-rich nation.

Likewise, Gadhafi played a role in the Italian economy since the 1970s. Today, Libya has investments in Italian aircraft manufacturer Finmeccanica and Italy's second-largest bank, Unicredit.

Deceased Italian industrialist Giovanni Agnelli once defended selling shares of automaker Fiat to Gadhafi, claiming that having oil-rich nations invest in the West would deter them from raising oil prices to the West's detriment. 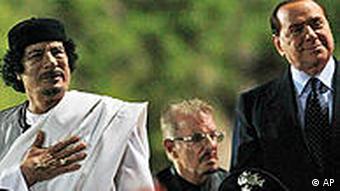 A tent in Paris

In December 2007, a massive bedouin-style tent in central Paris became the symbol of France's conciliatory attitudes toward Libya.

Gadhafi ordered the tent be pitched in front of the Hotel Marigny, where important foreign guests to France are housed. He used it to receive guests during his stay, which he extended from three days to six.

French Secretary of State for Human Rights Rama Yade was outraged by Gadhafi's visit, saying France was "not a doormat for a leader - terrorist or no terrorist - on which to wipe his feet of the blood of his crimes."

Yet, by the time Gadhafi returned home, France had landed 10 billion euros in deals, including an atomic energy plant for Libya, a desalination plant, and 21 Airbus planes. 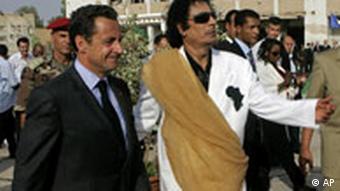 France's business deals with Libya are worth billions

The nurses were released under French pressure a day after Sarkozy and Gadhafi met in Tripoli to forge plans for the Franco-Libyan deals that were later signed in Paris.

France began cultivating its relationship with Libya in 2003, under Sarkozy's predecessor, Jacques Chirac. Chirac flew to Libya shortly after the United Nations lifted sanctions against the country.

During that visit with Gadhafi, Chirac demanded 170 million euros in reparations from Libya for the 1989 bombing of a French DC-10 jet, in which 170 were killed, including 53 French citizens.

The EU finds itself presented with an opportunity to lead in helping a number of Arab states move toward democracy but stubborn dictators who cling to power may expose the frailties of the EU's common foreign policy. (21.02.2011)

As the violence in Libya threatens to escalate further, the EU appears divided over how to deal with the growing crisis. Libya's regime has warned of a civil war - and vowed to fight the protests "to the last bullet." (21.02.2011)