Four German soldiers killed in Afghanistan | Germany | News and in-depth reporting from Berlin and beyond | DW | 16.04.2010

Four German soldiers have been killed and several others wounded in a clash in Afghanistan as they came under fire near the northern city of Baghlan, near Kunduz. 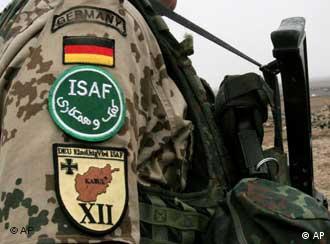 Forty-three Bundeswehr soldiers have been killed in Afghanistan

The German Defense Ministry has announced that four German troops were killed in Afghanistan, while on patrol in the north of the country.

According to reports, the four soldiers were killed and several others wounded when their patrol came under attack travelling between Kunduz and Baghlan. Fighting broke out after a German armored vehicle was struck by what was believed to be a rocket, close to Pol-i-Khomri camp.

During a visit to the United States, German Chancellor Angela Merkel expressed her condolences to the families of the soldiers who were killed or injured. But she said the German military's mission in Afghanistan would continue.

"I see no sensible alternative," she said in a statement to reporters in San Francisco.

German Defense Minister Karl-Theodore zu Guttenberg, who had left Afghanistan after a two-day visit, returned to the country after briefly landing in Uzbekistan.

Guttenberg said in a statement that he was "deeply saddened" by the news and that he and military chief Volker Wieker would return to the northern city of Mazar-i-Sharif "to be with our soldiers".

Foreign Minister Guido Westerwelle condemned the "treacherous attack" and said the tragedy "touches all Germans." He added the attack "also touches the great majority of the Afghan people, who detest this terror as much as we do."

This brings to 43 the number of German soldiers killed in Afghanistan since the Bundeswehr's mission there began in 2002. Of those, 26 have been killed in firefights or insurgent attacks.

In recent weeks, Taliban insurgents have stepped up pressure on the German troops based in the northern province of Kunduz. On April 2, three German soldiers were killed during a mine-clearing expedition.

German Chancellor Angela Merkel spent the past two days in California focusing on international scientific cooperation. But her final speech there focused on Afghanistan, and the need for German troops to stay there. (16.04.2010)

Guttenberg postpones his return to Germany

Four more German soldiers have been killed in Afghanistan. The German defense minister has decided to go back there after making a brief trip to Uzbekistan. (15.04.2010)