Former Siemens Board Member Sentenced for Bribery | Germany| News and in-depth reporting from Berlin and beyond | DW | 24.11.2008

A former top Siemens executive and a former trade union leader were sentenced Monday as part of a scandal over bribery payments totalling more than 30 million euros ($38 million). 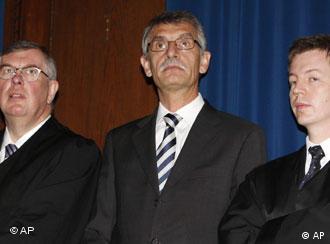 A court in Nuremberg, Bavaria, sentenced former Siemens management board member Johannes Feldmayer to a suspended two-year sentence for bribing Wilhelm Schelsky, the former head of the trade union sharing the limelight in the scandal, the Association of Independent Employees (AUB).

Feldmayer was also ordered to pay a fine of 28,800 euros.

Schelsky received a four-and-a-half-year prison term for receiving the channelled funds between 2001 and 2006.

The funds were meant to buy AUB's loyalty to Siemens and reduce the influence of another union, IG Metall.

The court decision comes in the wake of a wider two-year scandal over corruption and kickbacks at Siemens that has rocked the 160-year-old company.

The allegations of corruption have already led to several resignations among top management, including former chief executive Klaus Kleinfeld.

Munich-based Siemens has thrown around 510 million euros into internal investigations related to the allegations. 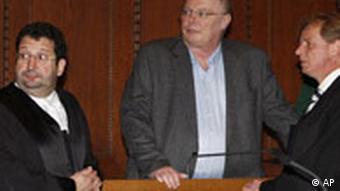 Feldmayer’s sentencing followed that of two other former Siemens executives Wednesday, Nov. 19 who were found guilty of assisting in a 1.3-billion-euro ($1.6-billion) worldwide web of bribery.

The men, Ernst Keil-von Jagemann, 58, and Wolfgang Rudolph, 69, had admitted being accessories to misappropriation and corruption at a two-day trial in Munich.

Kickbacks were paid in various nations including Russia, the court heard.

Siemens, whose products range from turbines and telecoms exchanges to trams, is struggling to re-establish itself as a graft-free company after the scandal.

Judge Peter Noll sentenced the Jagemann to two years in prison and a fine of 12,000 euros on 75 charges. Rudolph received nine months on two charges and was told to pay 20,000 euros to charity. Their prison terms were suspended.

A bribery scandal at German conglomerate Siemens began Wednesday as a former board member went on trial for breach of trust by misusing millions of euros. It's the first of several trials at the Munich-based company. (24.09.2008)

Report Presses Germany to Step up Fight Against Corruption

Though Germany moved up two spots in corruption rankings to number 14 on the list of 180, Transparency International has urged the government to do more to fight corruption. (23.09.2008)

German tech giant Siemens on Tuesday decided to sue two former CEOs and nine other ex-executives for setting up a system of kickbacks to secure lucrative foreign contracts that financially damaged the company. (29.07.2008)