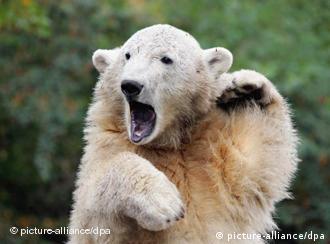 Now that baby bear can bite your head off

It's amazing how time flies. It seems like just yesterday that he was melting hearts with his fluffy white fur, cuddling with his keeper and posing for photos with other hot celebs like Leonardo di Caprio.

Now our little Knut is all grown up.

The Berlin Zoo celebrated its star attraction Wednesday with free entry for kids -- a small sacrifice, considering that the former powder puff drew in as much as 10 million euros ($14.7 million) by more than doubling ticket sales over the past year. That doesn't count revenue generated by Knut paraphernalia. 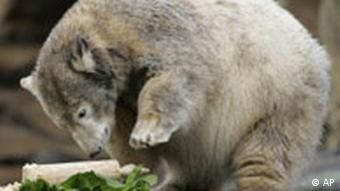 Only the candles are missing on Knut's birthday cake

Over 2.5 million people from all over the world paid the polar bear cub a personal visit, while millions more oohed and ahhed at his pictures in the media.

The birthday boy himself reportedly celebrated his big day with a cake of ice cream, fruit and vegetables, topped off with croissants and grapes and served up by keeper Thomas Dörflein.

Knut's life began as an 810-gram (29-ounce) orphan when his mother abandoned him after birth. Dörflein managed to keep the rising star alive with a bottle -- and the little guy became such a good eater that he had to go on a diet when his weight reached 60 kilograms (132 pounds) in July. 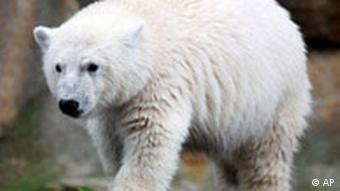 In July, Knut was told he had to drop a few pounds

Also in July, it was deemed too dangerous for Dörflein to romp and wrestle with his protégé. After all, the born carnivore has claws that would have to rip open seals and sea-lions if he lived in the wild. Now little Knut is up to a whopping 110 kilograms.

Knut's first year wasn't all roses and seal blubber. Prior to the weight-loss program in the summer, the superstar received a death threat in April which prompted heightened police security. In the same month he suffered from a toothache that forced him to call off public engagements. Later, in September, he hurt his right hind paw.

"Knut threw a tantrum when he saw me," said veterinarian Andreas Ochs, who treated the injury. 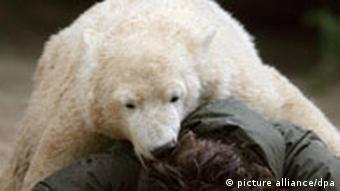 Knut can no longer play with his keeper

Conservationists and animal rights purists also stirred up controversy by saying that Knut should have been allowed to die naturally rather than be raised as a "half-human."

It is uncertain whether Knut will be able to stay in the Berlin Zoo -- a possibility which bear keeper Heiner Klös called unlikely, speaking Wednesday on Germany's RBB-Inforadio. Berlin already had two polar bear families and a third would be too expensive, he said.

His future residence won't officially be decided until May, however.

Knut may have to pass baton of fame 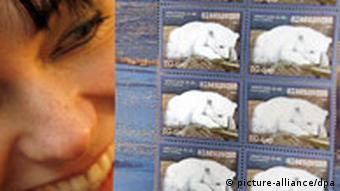 Knut has even made it onto postage stamps in Azerbaijan

The Berlin Zoo announced at the end of November that Knut may have three new siblings on the way. His father Lars reportedly impregnated all three of the female polar bears at the zoo, including Knut's mother Tosca.

With heavy competition coming in the cuteness department, Knut's fame may be short-lived. But at least he'll be in good company.

Reminisce over Knut's younger, fluffier days with the picture gallery below.

Being a child star can take its toll. Few are the pint-sized performers who reach adulthood unscarred. More common are the youthful tales of substance abuse, eating disorders and therapy, like those now faced by Knut. (01.08.2007)

Baby polar bear Knut is not only a cuddly cover boy and audience magnet, he's about to become an environmental activist. He's to be the subject of a new book aimed at educating people about climate change. (02.05.2007)

Are you a Knut fan? What do you think made the baby polar bear shoot to fame? Please include your name and country in your reply.