Flying Hospital Ready in an Emergency | Germany| News and in-depth reporting from Berlin and beyond | DW | 23.11.2001

Flying Hospital Ready in an Emergency

The Americans may have the most advanced air force in the world, but when it comes to medical airlifting, they turn to Germany. 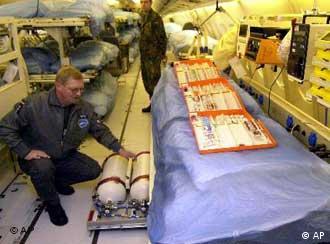 While the Americans were busy perfecting the technology on their latest fighter jets, the Germans set about designing the world's most modern flying hospital - the Airbus A310 MRT MedEvac.

From the outside, the A310 looks like any other Airbus and nothing like the envy of NATO's medical airlift command. But what makes the MedEvac so special is only visible on the inside: top-of-the-line medical equipment. When it comes to helping injured and providing quick medical transport, the Germans are ready.

The MedEvac is outfitted with six intensive care stations, each fully equipped with the latest medical technology from computers and diagnostic systems to long-term respiratory machines and automatic injections. Each station costs a half million marks and allows a highly-trained team of doctors and paramedics to do almost everything done in a hospital except operate. In addition to the six full-care stations, the plane also has hospital beds for transporting 38 other patients.

The flying hospital and its crew of 25 can be mobilized within three hours to go anywhere in the world. Not even the Americans have a comparable medical airplane for such quick deployment.

The MedEvac passed its fire test last November when the German air force flew to the Middle East to rescue 50 injured civilians in the Gaza Strip.

A system of clicks

The concept of the flying hospital is based on a relatively simple click system built into an ordinary Airbus. Depending on the air force's needs, beds and seats can be clicked in or out. The multi-functional transport plane can be outfitted to carry either 214 passengers, 30 tons of cargo or 42 critically injured.

It takes several days to install the medical equipment and computers, but once the machine is turned into a flying hospital, it's ready to go. Two fully-equipped MedEvacs are stationed at Cologne/Bonn airport awaiting deployment.

"We're ready whenever we get the call," Colonel Horst Abromeit, commander of the medical fleet said. "But I hope that doesn't happen."

One of the flying hospitals was on stand-by alert after the September 11 attacks. It was prepared to transport injured from New York to Germany, but was thankfully not needed in the end.