The trend has been around for a few years: A hole in the earlobe is stretched bit by bit, until it is large enough to fit a golf ball. It's actually not a big deal, if it's done properly. 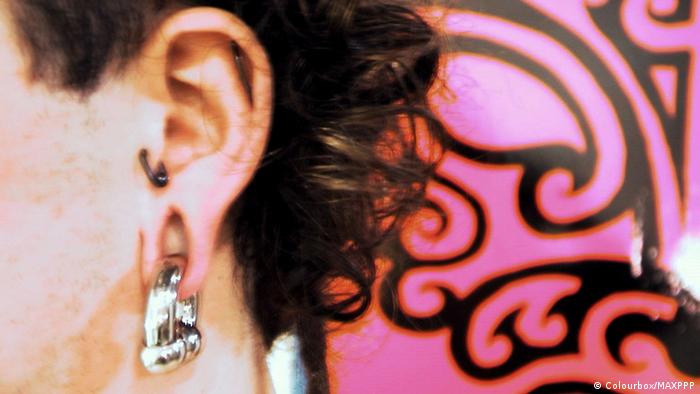 An icy wind tears through the city, carrying the occasional snow flake in its gusts. I glance at my phone. Its screen displays a map of the Berliner Nollendorfplatz and surrounding streets. I make my way across the square towards my destination: the Titanen piercing studio in one of the side streets. Once there, I am hoping to learn about so-called flesh tunnels.

What are flesh tunnels, you ask yourself. One glance around a packed train or a bustling shopping street and you'll find them: these giant holes in some people's ear lobes. The trend, in which people allow piercers to stretch their earlobe with rings of various shapes and sizes, has been growing for a few years now. Some holes are so large that one can see right through them. 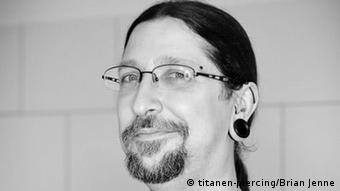 Brian Jenne is a piercing professional in Berlin

Framed by these brown tiles that I associate with the 1950s, the studio's window immediately catches my eye. Right in the middle, on top of a white shelf, a plastic human head dominates the scene. I can't make out much of its face, because it is wearing a black leather mask with cat's ears. Below it, neatly organized and color coded, are rows and rows of different piercings. Some are made of colorful plastic or glass, others are of gold, silver, wood or even amber. Although I have no idea what body parts they are made for, the assortment is pretty impressive.

Slightly nervous, because I have never been in a piercing studio before, I climb the stairs and enter. Two men look up from behind the counter. One of them must be in his mid-twenties with a red beard, tattoos and large holes in his ears. The other man is tall, maybe in his mid-thirties, wears glasses and has a thick beard streaked with grey. His long dark hair is tied back into a neat ponytail. He also has several piercings in his face and ears. "Brian?” I ask. The taller of the two men nods, "that's me.”

The studio is – there is no better way to describe it – white. A few glass display cases are scattered around the bright entrance area, showcasing more jewelry: tunnels and other piercings made from titanium, wood or steel. A few are decorated with small gemstones, glistening in the light from the display. The walls are hung with posters depicting various piercings and tattoos. We take a seat on a light grey leather couch.

Flesh Tunnel or Plugs? Yes, there is a difference 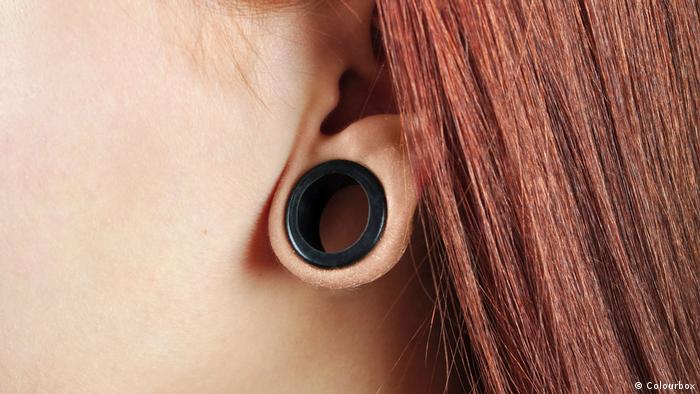 Brian trained as a tattoo and piercing professional in America in the 1990s. He has been working as a piercer in Berlin for nearly seven years. Whilst he talks, he repeatedly strokes his long beard. I watch him furtively. From where I am seated, I can see the hole in the cartilage right between his nostrils where he used to have a septum, a nose ring. His ears are also punctured in several different places.

My position only allows me to muster his left ear. Today, he isn't wearing a flesh tunnel, but rather a so-called plug. When I ask him about it, Brian smirks at my ignorance: "Well, it's like a flesh tunnel, just without the hole”. His fingers stroke the black plug in his ear. It looks a bit like a big button, I think.

By now, the hole in Brian's ear is 26 millimeters or 2.6 centimeters (about 1.02 inches) in diameter. It takes at least two years to achieve a hole that size. Most people don't know that a flesh tunnel takes time and patience. "People come into the shop and want a flesh tunnel immediately. They don't understand that it takes several months,” he explains.

How is a flesh tunnel made?

I ask him how flesh tunnels are created. "First you pierce a small hole in the center of the ear lobe. That hole is the same size as that of a normal earring, about 1.2 to 1.6 millimeters. Every six to eight weeks the hole is stretched by inserting a new tunnel that is one millimeter larger than the last,” Brian explains. However, a hole can only be widened once the healing process is completed. And that very much depends on the individual's skin type. "Some clients can insert the next size after six weeks; others have to wait for three months”.

Another way to create a flesh tunnel is by punching out a three to five millimeter large hole, Brian explains. At the same time, a plug is inserted into the wound. Although this way is much faster than the strenuous stretching process, Brian prefers the latter. "People lose more blood when a hole of that size is punched out of the ear lobe and the risk of infection is much greater.”

The stretching procedure isn't cheap. Piercing an ear costs approximately 25 Euros. With every expansion, one doesn't only pay the jewelry, but also the stretching process. The Titanen piercing studio charges about five Euros for the expansion and a tunnel of 1.2 millimeters is about 17 Euros. And that's only one ear. Jewelry for both ears would cost about 30 Euros, says Brian. 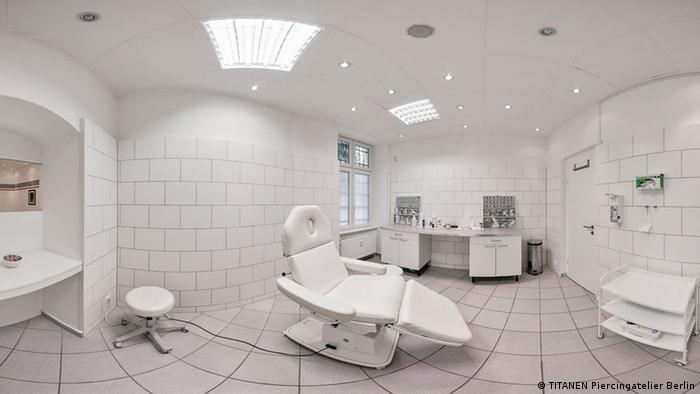 We get up. Brian leads me into the back of the shop, along a brightly lit corridor, into another room. "This is where the magic happens,” he says. The piercing-room looks a bit like the operating theatre from a movie. Admittedly, there aren't as many instruments and there are no white-clad doctors rushing around with face masks, but the atmosphere is similar. The white tiles give the room a sterile look, and the light grey leather chair reminds me of the dentist. Along the wall, just above a polished metal bench, are rows and rows of small drawers containing hundreds of piercings in different shapes and sizes. Every piece of jewelry is wrapped individually. "The health department has very strict hygiene standards,” Brian explains. "Every six months, we have to check the expiry dates on each bag. If a package is expired, the piercing has to be sterilized and newly wrapped.”

The fact that many people don't understand how important the correct jewelry is for wound healing, makes him sad, says Brian. Social media are especially at fault. "Other piercing professionals post expensive jewelry on Instagram or Facebook as a form of advertising. It might look great, but this type of jewelry is not advantageous to the healing process, because it cannot be cleaned properly and can cause infections.” Early on in the stretching process this type of jewelry shouldn't be used, and this holds not only for flesh tunnels but for all sorts of piercings.

I want to know whether Brian has ever had problems with prejudices because of his flesh tunnels. My gut feeling tells me that most people feel that the sight of these giant ear lobe holes takes some getting used to. But Brian shrugs. In Berlin and generally in Europe, he has never had problems. In America, however, it is quite different. "About seven years ago, I walked through a park in Chicago and the people were staring at me. For a long time, I couldn't understand why. They were just not used to the sight of my tunnels and other piercings. And at that time I didn't even have the very obvious tattoo on my hand,” he laughs.