Fischer Says Compromise and Respect Can Defuse Iran Crisis | Europe | News and current affairs from around the continent | DW | 03.08.2006

In Tehran, Joschka Fischer said that Iran's right to civilian nuclear technology was accepted in the West but steps would have to be taken to rebuild confidence and defuse tensions over its enrichment program. 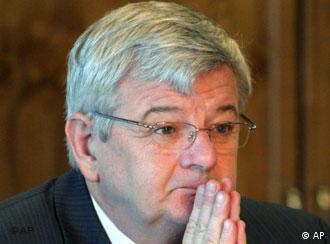 He may be visiting Iran as a privately invited guest speaker at a round-table debate organized by a Tehran think tank, but former German Foreign Minister Joschka Fischer is not keeping his views on current Middle East affairs to himself while in attendance.

While speaking during the "Iran-Europe Ties" debate at Tehran's Strategic Research Center of the Expediency Council on Wednesday, Fischer told those gathered that Iran's right to produce nuclear energy for civilian purposes was officially recognized by Europe and the West.

But in an interview with a German newspaper published on Thursday, Fischer also warned that the country would face serious consequences if it defied the ultimatum the United Nations issued to the Islamic republic on Monday.

"No country denies Iran's right," he said during the discussions in Tehran, adding that only confidence-building measures were required to make a difference in the disintegrating relationship between Iran and the West.

"If such confidence-building is realized, great advantages either in terms of peaceful use of nuclear energy or in other political and economic domains would be provided for Iran," Fischer added. 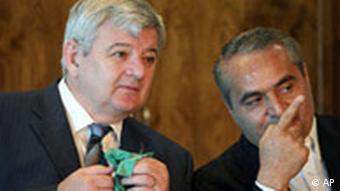 "If Iran cooperates with the international community, it will be the big winner," he said "Europe has accepted Iran's right to the peaceful use of nuclear energy and respects the right, but Iran's hasty construction of heavy water reactor in Arak and enrichment of uranium up to the level of 3.5 percent have worried Europe."

Fischer told the assembled academics and diplomats at the meeting that the West feared that an Iran armed with nuclear weapons might prompt other regional states to enter into a race to acquire nuclear arms. He warned that, as a result, the region could turn into a warehouse of nuclear weapons, which would be extremely detrimental to peace, stability and security in the Middle East region.

Weapons fear must be removed 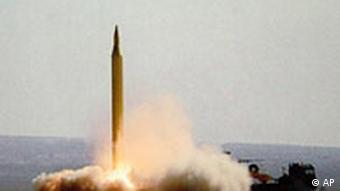 Iran has been stepping up missile tests this year

"Relieving such a concern would be in favor of Iran-Europe relations," he said. "Europe is ready to use all its capacity to support Iran's peaceful nuclear technology and cooperate with the country."

Fischer explained that Iran was facing an important moment in its history. It could choose to take on a large and outstanding role in the Middle East and the world, and assume a leading role in protecting peace, stability and security in the region, or choose to be a detrimental force, complicating and exacerbating its problems. The country's choice, he said, could be influenced by how other nations treat Iran.

"This is the time for clever diplomacy," he said. "In essence this will depend on the United States' conduct towards Iran. And here there is cause for skepticism."

Iran would also have to meet the West halfway to ensure a peaceful resolution to the nuclear stand-off.

In the interview in Thursday's Süddeutsche Zeitung, Fischer said that Tehran's current stance had given him "little cause for optimism" and that "Iran's official announcements on the UN resolution are clearly negative." 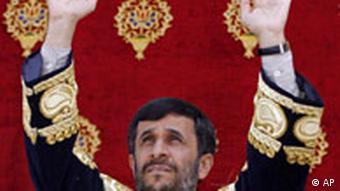 Ahmadinejad said Iran would not bow to "force and threats"

The UN Security Council gave Iran until Aug. 31 to halt its controversial nuclear enrichment activities, which the West sees as a bid to acquire nuclear weapons. Hard-line Iranian President Mahmoud Ahmadinejad on Tuesday vowed that Iran would not bow to "force and threats," while Iran's parliament speaker Gholam-Ali Hadad-Adel called the UN resolution "worthless."

Despite such statements, Fischer urged Western diplomats to pursue contacts on all levels in Iran because "radical and reform-minded politicians are having a heated debate behind closed doors" on the matter.

"If the talks start more speedily and even in several phases, the chance for reaching mutual understanding will not be missed," he added.

Former German Foreign Minister Joschka Fischer began a four-day visit to Iran Monday as the guest of a Tehran think-tank with a growing chorus calling for him to return to the Middle East in a more official capacity. (Aug. 1, 2006)

The UN Security Council has ordered Iran to halt its nuclear activities by Aug. 31 or face the threat of sanctions. Germany and the United States applauded the measure. But it was immediately rejected by Tehran. (Aug. 1, 2006)

Mahmoud Ahmadinejad and the Year of Living Dangerously

Iranian President Mahmoud Ahmadinejad was sworn into office on August 3, 2005. One year on, Deutsche Welle's Peter Philipp looks back on Ahmadinejad's impact on his country and on the wider international community. (Aug. 3, 2006)