Firestorm Continues Over Pope′s Condom Remarks in Africa | Europe | News and current affairs from around the continent | DW | 18.03.2009

Controversy over the pope's comments about condom use continued to swell across Europe and the US. The pontiff said using condoms could aggravate the problem of AIDS in Africa. 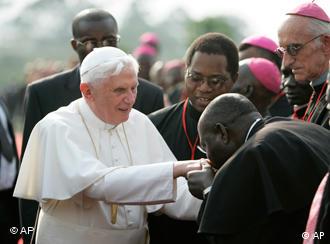 Many Africans, including this clergyman, celebrated Benedict

The Vatican on Wednesday, March 18, defended Pope Benedict XVI's comments regarding the use of condoms as a means to prevent the spread of AIDS. The move came in the face of a storm of angry criticism from AIDS activists, doctors and politicians.

On Tuesday, the pontiff made his first visit to Africa, a continent ravaged by the AIDS virus. On the plane ride, he told reporters that rather than contributing to disease prevention, condoms "aggravate the problem."

The solution lies in a "spiritual and human awakening" and "friendship for those who suffer," said Benedict, who is the leading religious figure for the world's 1.1 billion Roman Catholics.

A priest at Radio Vatican told Deutsche Welle that the pope's comments were being blown out of proportion. He said condoms were helpful in a crisis and added that the spread of AIDS could be fought by battling against poverty and promoting democracy. 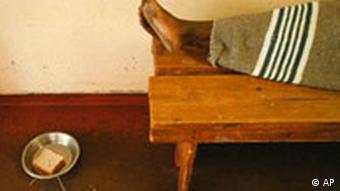 "If Africans were as rich as us there would be less AIDS there," Eberhard von Gemmingen, the head of Radio Vatican's German section told DW. "You can't just say, 'Use condoms and the problem is solved.'"

Still, the pope's comments unleashed a firestorm of controversy among non-governmental organizations and politicians.

On Wednesday, the UN program against HIV/AIDS, UNAIDS, rebuked the pope's comments, saying condoms are an essential and effective component in preventing the disease.

"Condoms are an essential part of combination prevention," it added, advocating a range of social, behavioral and medical measures.

According to the UNAIDS 2008 report on the global AIDS epidemic, some 22 million people in sub-Saharan Africa are HIV positive. Some 33 million people worldwide are estimated to be infected with the HIV virus, which can lead to AIDS.

Ministers: Not using condoms is irresponsible 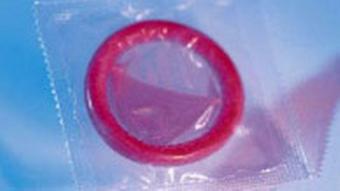 In Germany, Development Minister Heidemarie Wieczorek-Zeul and Health Minister Ulla Schmidt responded to the pope's comments by saying that condoms are a "decisive" tool in the fight against AIDS and HIV.

AIDS is "still one of the greatest threats to humanity," the politicians said at a press conference in Berlin. Modern development work needs to involve providing access to condoms to the poorest of the poor, they said, adding that anything else is "irresponsible."

"We've had enough of this pope"

Stronger words were used by German Green European deputy Daniel Cohn Bendit, who told French radio simply, "We've had enough of this pope." He went on to describe Benedict's remarks as "close to premeditated murder."

Heavily Catholic France also severely criticized the pope's remarks. A foreign ministry spokesman called the stance "damaging to health policy," and said the condom "is an important element in the fight against the spread of the virus." 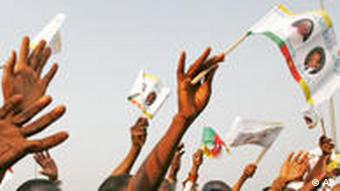 Crowds of believers cheered the Pontiff in Cameroon

Church doctrine opposes the use of contraceptives, including condoms, which in addition to preventing unwanted pregnancies are an effective barrier to HIV/AIDS. Instead, the Catholic Church teaches that fidelity within heterosexual marriage and abstinence are the best ways to stop AIDS.

The Vatican defended the pope's stance. Vatican spokesman Father Federico Lombardi told reporters that Benedict was merely "maintaining the position of his predecessors."

The Vatican has also said condoms can lead to risky behavior, but many contest that view.

"The guidance we give is that condoms are highly (effective) to prevent the transmission of HIV if they are used correctly and consistently," he told Reuters.

There were signs of dissent from within the Church, as well.

"Anyone who has AIDS and is sexually active, anyone who seeks multiple partners, must protect others and themselves," said Hans-Jochen Jaschke, Roman Catholic auxiliary bishop of Hamburg, Germany.

In a letter to bishops around the world, Pope Benedict XVI has conceded "errors" in the way the church handled the case of a Holocaust-denying bishop whose excommunication was lifted by the pontiff. (12.03.2009)

Leading progressive theologian Hans Kueng has said the Catholic Church increasingly threatenes to deteriorate into a sect under Pope Benedict XVI, prompting protests from the Vatican. (28.02.2009)

Nearly 59,000 people in Germany are infected with HIV, the virus that causes AIDS. Though AIDS remains an incurable disease, developments have made living with it a bit easier for those infected. (01.12.2008)