A fire in a Dubai skyscraper that caused hundreds to be evacuated has been extinguished, with no reported casualties. The tower, called The Torch, is one of the world's tallest residential buildings. 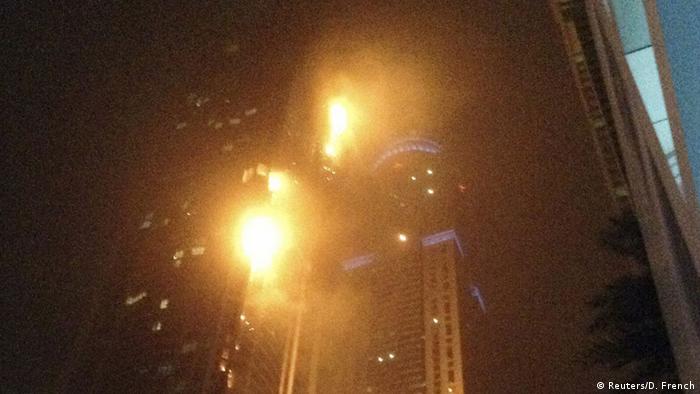 The fire, which broke out on Saturday at around 2 a.m. local time (2200 UTC, Friday), was successfully put out several hours later, civil defense officials said, after hundreds of people managed to escape from the flames.

Witnesses said flaming debris fell from near the summit of the structure, which stands more than 330 meters (1,082 feet) tall.

The Gulf News newspaper reported that the blaze began on around the 50th floor of the some 80-story building, and later spread above the 70th floor after being fanned by high winds.

Several people who fled the building were being treated for smoke inhalation, the paper said, but no serious injuries or deaths were reported.

Residents of the building have been told that they would not be allowed back into the building until approval is given by fire officials later on Saturday. Those living on the upper floors may have to wait for days before they can return.

The cause of the fire remains unclear.

The Torch stands in Dubai's Marina district, which is home to dozens of such high-rise apartment blocks. Many of the apartments are inhabited by expatriate professionals working in the trade and investment hub.

The Gulf state of Qatar has promised to improve conditions for laborers working on its 2022 World Cup stadiums. For the moment though, life is tough for the - mainly migrant - workforce toiling under the sun. (09.02.2015)