African leaders warned that the financial crisis hitting advanced economies was no reason to slash foreign aid commitments to Africa, which is in danger of falling far short of a series of UN goals. 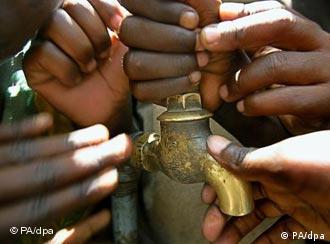 All hands to the pump: African leaders want the UN to achieve their development goals

African leaders warned Monday, Sept. 22, that the financial crisis enveloping advanced economies was no reason to slash foreign aid commitments to the African continent, which is in danger of falling far short of a series of UN goals on reducing poverty.

Their advice came as world leaders promised a renewed effort to pull Africa out of poverty and into the "mainstream of the global economy," after a one-day United Nations conference taking stock of the continent's progress.

More than 40 world leaders took part in the UN conference in New York, which came one day before heads of state begin speeches to mark the annual opening of the General Assembly.

UN Secretary General Ban Ki-moon earlier warned that not one African country was on track to meet all of the UN's Millennium Development Goals, a series of poverty-reducing targets that were adopted in 2000 and were to be met by 2015.

Ban issued a plea for $72 billion per year in foreign aid if Africa was to have any hope of reaching the UN goals.

"This price tag may look daunting. But it is affordable and falls within existing aid commitments," Ban said, urging the developed world to meet a 2005 pledge to double aid to the continent.

African leaders promised to take the initiative in tackling the continent's many ongoing problems but warned that they would not be able to get on track without outside help. 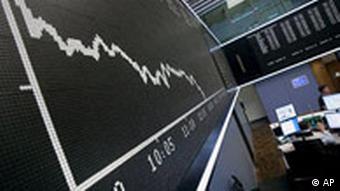 The effects of the financial crash have been felt globally

"We want developed countries to deliver" on their promises of more aid, Tanzanian President Jakaya Kikwete, chairman of the African Union, said at a press conference in New York.

Kikwete warned that the financial crisis could have "serious implications" on foreign aid commitments but added that he expected the turmoil in the US banking sector to calm down over the coming months.

A series of bankruptcies and massive government bailouts of financial institutions last week in the United States led global stock markets on a roller-coaster ride and sparked concerns that the credit crisis could have far-reaching effects for the global economy.

"We need to prevent our development efforts from being swept away by the tide of financial markets," said Heidemarie Wieczorek-Zeul, Germany's minister for economic cooperation and development.

A seven-page political declaration Monday evening underlined the "urgency" of meeting Africa's challenges and promised fresh resolve on everything from tackling regional conflicts and disease to addressing food shortages, improving infrastructure and combating the effects of global warming. 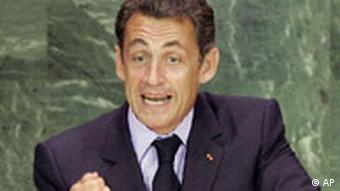 Donald Kaberuka, president of the African Development Bank, said that the ongoing financial turmoil showed just how interconnected the world has become. He quipped that New York's losses last week showed Africa may be a better place to do business than many investors think.

"Many more people have lost money in this city than in Africa over the past couple of weeks," Kaberuka said.

The evening declaration called on the developed world to meet its 2015 target of committing 0.7 percent of its government budget to development aid.

French President Nicolas Sarkozy said that Africa had "found its way back to growth" over the last decade, but that the European Union heeded the UN's warnings and was committed to meeting the 2015 goal.

"The globalized world needs a developed Africa," Sarkozy said, adding that Europe was "deluding" itself if it believed security and stability were possible for itself without bolstering the economies of its African neighbors.

Ban warned that climate change was already having a serious impact on Africa. Local conflicts over dwindling natural resources "could spin out of control" if left unchecked, he said.

The World Food Program issued an appeal Monday for nearly $500 million to assist 9.6 million Ethiopians affected by drought and food prices, which have soared in recent years on world markets.

The conference on Africa comes at the half-way point of the UN's 2015 target date for meeting the Millennium Development Goals. A broader conference on MDG progress around the world will be held Thursday.

The UN General Assembly will review efforts to eradicate poverty and hunger next week, just as the world economy is slumping and high food prices have stripped the poor of their purchasing power. (21.09.2008)

Leaders Vow to Tackle Hunger in Much Criticized Summit

Opinion: We Can't Afford to Lose the Fight Against Hunger

Agriculture is finally back on the world's agenda, but it will still take a concerted effort to fight hunger, said DW's Susan Killick, reporting from the UN food security conference. (05.06.2008)