After the US-Italian car giant brought a 10-percent stake of the legendary racing car brand to Wall Street last week, it has now announced gross proceeds of close to a billion dollars from the share issue. 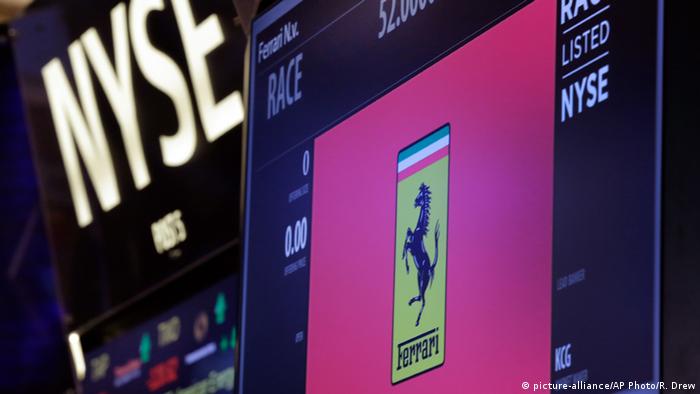 After closing the book on the Ferrari initial public offering (IPO) on Monday, Fiat-Chrysler Automobiles (FCA) said the sale of 10 percent of the shares in the Italian racing-car maker earned it $982.4 million (889.2 million euros).

Ferrari made its debut on the New York Stock Exchange on Wednesday last week amid strong demand from investors. The share price jumped to nearly $61, compared to a pre-sale price range of $48 to $52, and settled to $57 by the end of that day.

On Monday, the share price was hovering around the $55-mark.

FCA still owns 80 percent of Ferrari's capital, valued at $10 billion after the IPO. It plans to redistribute those holdings to shareholders in early 2016 as part of a spin-off aimed at reducing FCA's debt, and to invest in expanded production.

Fiat Chrysler Chief Executive Sergio Marchionne, who also serves as Ferrari's chairman, said the company is planning to ramp up Ferrari sales modestly from slightly over 7,000 units a year to 9,000 by 2019, while at the same time maintaining the racing car's exclusivity.

"What is at the heart of the brand is this intimate relationship between us and the customer. It would be almost suicidal to try to expand volumes to the detriment of that relationship," he said.

The challenge is for Ferrari to build on its strengths amid an increase in competition from an expanding choice of $200,000 to $2 million supercars, like those from McLaren, Bugatti, Lamborghini and Aston Martin, among others. Without mentioning any of them, Marchionne said that competitors "are not at par with a Ferrari."

The iconic sports car maker has roared onto the New York Stock Exchange. The RACE stock got off to a strong start on its first day of trading, ending firmly above the opening price and raising nearly $1 billion. (21.10.2015)

Fiat Chrysler CEO Sergio Marchionne is relentlessly pestering GM to explore a merger with his company. GM has consistently shown him the cold shoulder, but the FCA chief insists a merger would be hugely profitable. (31.08.2015)

Italian-American automaker Fiat Chrysler has been ordered by US regulators to pay a record multimillion dollar penalty for lapses in safety recalls. The company will also buy back some defective vehicles. (27.07.2015)

Military guns have been fired from the Tower of London, Edinburgh, Belfast and British warships at sea to mark the death of Prince Philip.