Federal prosecutors have taken over the murder investigation of local German politician Walter Lübcke. They believe there was a far-right motive, but have no evidence the suspect was part of a terror network.

A spokesman for the German Federal Prosecutor's office on Monday said investigators suspected a far-right motive behind the murder of Walter Lübcke, a local politician from the western state of Hesse.

On Saturday, special police units arrested a 45-year-old man in connection with the killing in the central city of Kassel, 160 kilometers (100 miles) northeast of Frankfurt. Authorities said the arrest "was based on a DNA match."

The individual was then brought before an investigating judge on Sunday and remanded in custody. Investigators said they would only release further information about the suspect and the ongoing probe next week.

Lübcke, the head of the regional council in Kassel, was found lying on the terrace of his home in Istha on June 2. He was declared dead two hours later.

According to the autopsy, the 65-year-old was killed by a bullet fired at close range. Suicide had been ruled out. 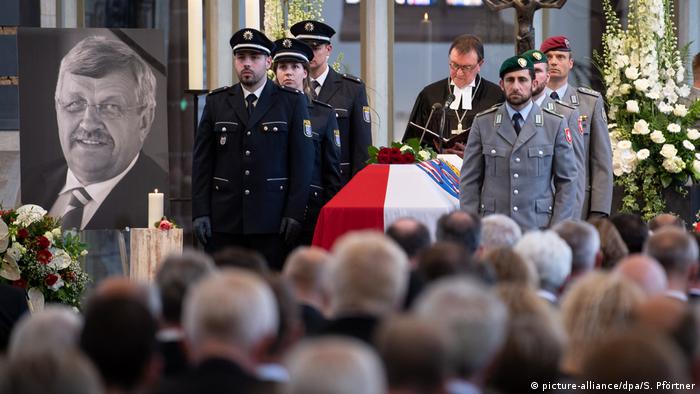 Amid opposition to Germany's decision to allow a huge wave of Syrian refugees and other migrants to enter the country, the politician declared it was morally right to give protection to those in need.

A week after the murder, a man traveling on a tourist ferry in Eastern Friesland was arrested but was later released without charge.

Lübcke's funeral service, on Thursday, was attended by 1,300 people.

A suspected neo-Nazi's arrest in the Kassel politician's murder case has focused concerns on far-right terrorism in Germany. The city is home to an extremist scene and was the location of a notorious NSU murder in 2006. (17.06.2019)