Fear of a Palin Presidency Drives US Expats to Vote for Obama | Germany | News and in-depth reporting from Berlin and beyond | DW | 02.11.2008

The economy, taxes and America's image are hot-button issues for US expats in Germany. But even Republicans are now going Democrat for a far more compelling reason: Fear that Sarah Palin could become president. 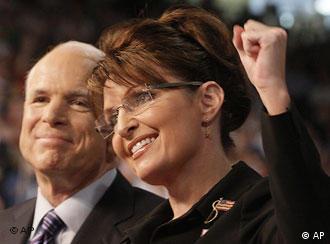 Jim Sides, 55, a Californian living in Bonn, is a swing voter who cast his ballot for President George W. Bush in 2004. This time the one single factor driving him to the Democratic ticket is the possibility that the Republican vice-presidential nominee Sarah Palin is a heartbeat away from the American presidency.

If John McCain is elected next Tuesday, the 72- year-old Republican senator from Arizona, who has battled skin cancer, would become the oldest US president in history.

“Let’s say McCain doesn’t make it health-wise -- then we’d wind up with Caribou Barbie in the White House,” Sides said, referring to the Alaskan governor’s bouffant hairdo and the political lightweight impression Palin has made on millions of television viewers.

Sides, a CEO of Meyer Sound Germany, a division of the US manufacturer of professional loudspeakers, said he had been even leaning towards McCain before Palin entered the Republican ticket. 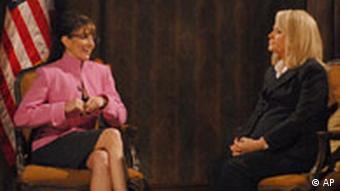 “I had a very high regard for John McCain based on my knowledge of his record as senator. He was an honorable man, a war hero, but after he picked Palin, I felt he had betrayed his country,” he said.

“I was in a state of pure shock. Leaving someone completely unqualified intellectually in a position to step into the Presidency was so irresponsible,” Sides continued.

Sides’ wife Lisa, who had also liked McCain, felt that the Vietnam veteran’s extensive military experience could be valuable in finding a realistic exit strategy out of the morass in Iraq.

“But picking her (Palin) pushed me over the edge towards Barack Obama. McCain made that choice based on trying to win the election rather than having the best interests of our country in mind,” she said.

The choice of Palin was meant to balance and galvanize the Republican ticket with a social conservative who could draw on the extreme, evangelical elements of the party as well as female Hillary voters.

But the move wound up alienating many of the US expatriates DW-WORLD.DE spoke to in the old American settlement of Bonn’s scenic Plittersdorf district on the Rhine River, where life revolves around the international school and English-language church. 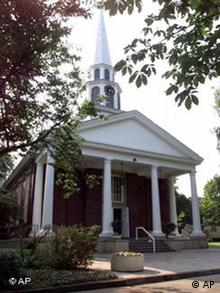 US expats meet at Stimson Memorial Chapel in Bonn

All those interviewed said it was a key, if not the key reason, to vote for Barack Obama, whether they liked the Illinois senator or not.

The expatriates in the former German capital come from all over the map in the United States and reflect diverse political views. They tend to be better off than their compatriots back home, since many are managers at blue chip US multinational companies. That puts tax policy, trade and America's image abroad high on the list of issues that matter to them.

Jeff Nagel, 44, a top executive at one such multinational, said that the way McCain made his vice-presidential choice reflected the personality differences between the two presidential candidates. That sealed his decision to vote for Obama instead, he said.

“As a businessman, I look at an individual’s leadership skills regardless of their experience and position on the issues. I agree with Obama only about half the time,” said Nagel, who had previously voted for President George W. Bush and describes himself as a free trader and fiscal conservative, but a moderate on social policy.

“But look at how he has managed his campaign, taking on the Democratic establishment Clintons. Look at how he articulates his positions, and his ability to keep a level response through the ups and downs of his campaign,” he said adding that Obama has already shown that he is a thoughtful and effective leader through his choice of six-term Delaware senator Joe Biden, 65, as his running mate. 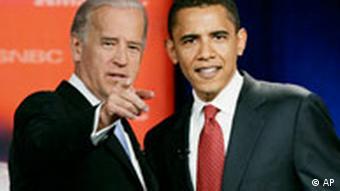 Obama's choice of Joe Biden (left) has been widely praised

“Biden is someone who can deliver the experience that Obama lacks, but not the electoral votes that he needs to win the presidency. Obama’s choice was not based on the short term decision to get into office, but to put together a good team for the long haul in office,” continued Nagel, who declined to name his company since he was expressing his personal views.

Many expats like Nagel see McCain’s public outbursts and unpredictability that his Republican handlers call “maverick”, in a negative light. They say that McCain’s ‘shoot first, ask later’ fighter pilot mentality that might work on the battlefield, is unsuited for the US presidency, which requires a cool head.

Others have expressed serious concerns about McCain’s judgement. Matthew Howard, a global engineering manager based in Cologne for Ford Motor Company, who has Republican leanings and is not convinced of Obama, has vacillated so much with his absentee ballot that it is now too late to cast his vote.

“If McCain had picked (former Massachusetts governor) Mitt Romney or any other qualified candidate, I would vote for him in a flash. Picking a running mate was the most important decision of his candidacy and he blew it with Palin. How could he be so dramatically out of touch to pick this woman?" asked Howard, who added that the role of VP today is no longer just a president-in-waiting, but an important team player in the cabinet.

“If I were back in Michigan, I wouldn’t be able to sit home on Election Day. It’d be painful, but I’d vote Obama,” said Howard, explaining that he generally dislikes Democrat fiscal and economic policies.

Resigned into voting for Barack Obama 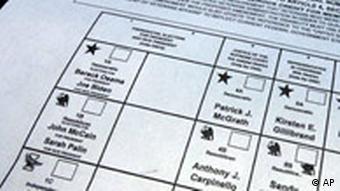 Expat absentee ballots can make a difference in swing states

Vera-Lynn Lewallen, 53, who was born on a military base in Germany and grew up in North Carolina, sent in her absentee ballot, but initially thought of abstaining, since she is bitter at the Democratic Party for casting aside Senator Hillary Clinton in favor of Obama.

“I’d rather not vote if I’m not happy with the Democratic candidate, but now I feel blackmailed by the Republicans into voting, because they picked this Palin woman,” she said.

Then there is Mickie Nagel, who unlike her husband, an Independent, has been a lifelong Republican and even worked on the campaign to re-elect the incumbent president’s father, George Bush Sr. She was opposed to Palin enough to cross the line for the first time in this election. “I never thought I would vote for a Democrat,” she said.

One Ford engineer and mother of two, who asked not to be identified, did vote for McCain out of loyalty to the Republican Party, but also voiced serious doubts about Palin. She is taking strange comfort in the fact that her absentee vote won’t count in her home state.

“Michigan is a clear blue state. Obama will win there anyway,” she said with a sigh of relief.

As the US presidential election enters its final week, the vast majority of the world is rooting for Barack Obama. But analysts say that high global expectations of the Democrat will lead to disappointment, if he wins. (28.10.2008)

US presidential candidate John McCain's choice of greenhorn Alaska Governor Sarah Palin as a running mate took many by surprise. A German expert on US politics called the choice "risky, but very good." (01.09.2008)

In her first media interview, John McCain's running mate said she supports Georgia's NATO bid and emphasized the US government's responsibility to defend Georgia -- even if it means going to war with Russia. (12.09.2008)