In a last-minute coalition deal, Israel's far-right has given Prime Minister Netanyahu the majority needed to stay in power. The left has called the move a "failure." DW's Daniella Cheslow reports from Tel Aviv. 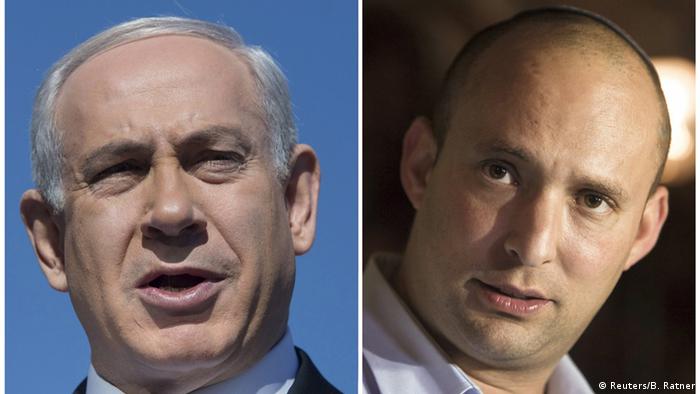 Israeli Prime Minister Benjamin Netanyahu cobbled together a religious, hawkish ruling coalition Wednesday, for a government that will likely continue to clash with the United States and roll back reforms limiting the power of ultra-Orthodox Jews.

With negotiations lasting until an hour before the midnight deadline, Netanyahu was forced to give the powerful Justice Ministry to the pro-settlement Jewish Home party. Religious parties Shas and United Torah Judaism demanded as a coalition condition that Netanyahu undo efforts of the previous government to draft the ultra-Orthodox.

Together, Netanyahu's coalition comprises a razor-thin majority of 61 seats in Israel's 120-seat Knesset, or Parliament. The last-minute race to scrape together allies contrasted with Netanyahu's crushing victory in Israel's March elections, when he trounced rival Labor party candidate Isaac Herzog. In a late-night press conference Wednesday, an exhausted Netanyahu vowed to expand his majority.

"Sixty-one is a good number, and 61-plus is an even better number," Netanyahu said. "But it starts at 61 and we will begin. We have a lot of work ahead of us."

"No" to Palestinian state

The final days of coalition negotiations were grueling. On Monday, former Foreign Minister Avigdor Lieberman left negotiations, taking with him six members of his Israeli Our Home party. The departure of Lieberman gave hawkish Naftali Bennett's Jewish Home party a critical role in pushing Netanyahu to a coalition majority. Bennett insisted that both the Education and Justice Ministries go to his party, which will likely give him two seats in the seven-member security cabinet that decides on issues of war and peace. Bennett advocates annexing parts of the West Bank and is a staunch opponent of a Palestinian state.

The prominent position of the Jewish Home in Netanyahu's coalition comes after a divisive political campaign that raised hackles among political allies in the United States and Europe. In the days before Israelis went to the polls, Netanyahu vowed to never establish a Palestinian state, and warned on election day that "Arab voters are going to the polls in droves." Political analyst Tal Schneider observed that the new government has ignored the Palestinian issue.

"None of the parties that entered the government is demanding to negotiate with the Palestinians as a condition of joining the coalition," she said. "Look at the foreign minister. He doesn't even want his job."

The most moderate member of the new government is Moshe Kahlon, of the newly formed Kulanu party. He has pledged to use his post as finance minister to break up big banks and reduce housing costs. Yet the narrow coalition may torpedo his efforts to take on the most powerful economic institutions in Israel, Schneider said.

Rival lawmaker Herzog, who attained 24 seats for his center-left Zionist Union party, called the newly formed coalition a "national failure government." His party denied reports that Netanyahu courted him to join the coalition, and vowed to stay in the opposition.

Netanyahu has submitted his coalition list to Israeli President Reuven Rivlin. The new government will be sworn in next week.