Far-Right German Party Belittles Holocaust | News and current affairs from Germany and around the world | DW | 22.01.2005

A week before Europe hosts a series of memorial services in honor of the freeing of Auschwitz, a group of far-right German politicians caused a stir by walking out on a state ceremony for Nazi victims. 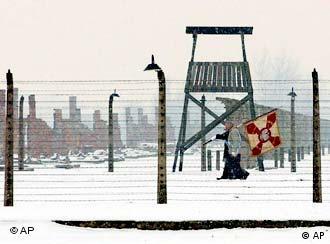 Jan. 27 is the 60th anniversary of the liberation of Auschwitz

January 27 marks the 60th anniversary of the liberation of the Nazi death camp Auschwitz by Allied forces. To commemorate the event, ceremonies will be held throughout Europe, Israel and the US. In New York on Monday, the United Nations, for the first time in its history, will pay tribute to the millions of people who suffered in the Holocaust.

In Germany, the historic moment when Soviet forces freed the infamous Auschwitz-Birkenau camp in Poland in 1945 will be remembered throughout the country. On Friday, a week before the anniversary, the state parliament in Saxony paid tribute to the victims of the Nazis – some six million Jews – with a moment of silence.

Instead of being a solemn moment of reflection, the tribute turned into a political bashing as 12 regional lawmakers for the far-right National Democratic Party (NPD) refused to participate and stormed out of the chamber.

Earlier in the week the NPD, which rocked mainstream political parties in Germany by winning a surprising 9.2 percent of the votes in last September’s state election, had filed a motion asking that the minute of silence be restricted to commemorate the victims of the Allied bombing of Dresden, Saxony’s capital, in February 1945. The parliament overwhelmingly rejected the request.

Cornelius Weiss, senior parliamentarian and parliamentary group leader for the Social Democrats (SPD), said the proposal was unacceptable. “We must never forget the hell of Dresden, but neither must we forget how we got to that point,” he told the parliamentarians and listed such historical factors as Adolf Hitler seizing power in 1933, the Holocaust, concentration camps and the German bombing of British cities. 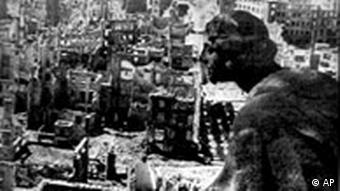 In the motion to focus only on Dresden, NPD’s parliamentary group leader Holger Apfel justified the request by referring to the destruction of the Baroque city as a “bombing Holocaust.” The rest of the parliament booed the NPD’s statements and walked out of the chamber. When Apfel referred to the Allied attacks on Germany as “mass murder” and the current policy of the US and Britain as organized by “gangsters,” his microphone was turned off.

A day after the event, the Central Council of Jews in Germany responded to the NPD’s outburst with harsh words. “There is no excuse and no justification for such insidious remarks,” it said in a statement. The bombing raid on Dresden can not be compared to the Holocaust. To do so is a grotesque rewriting of history and belittles the deaths of millions of Jews, the council said.

The NPD is a slap in the face to all established parties and all democrats well beyond Saxony, the statement said. The Council said the events in Saxony’s parliament and the rise in popularity for right-wing parties showed that “anti-Semitism and racial hatred had now become socially acceptable.”

On Saturday, German Interior Minister Otto Schily sharply criticized the NPD. “We cannot allow for such statements to go unheeded and expose our youth to racist and unconstitutional ideas,” he told German public broadcaster ARD.

The NPD “sullies the image of Germany to such a degree that something worse is hardly imaginable,” the minister exclaimed.

Claudia Roth, co-chair of the Greens party referred to the NPD outburst as anti-Semitic and racist and said such extreme right-wing ideologies needed to be vehemently countered by all democrats in Germany. The NPD mocks and offends millions of people, the victims of Nazi terror and its racial insanity, she said and called on the federal government to determine whether the NPD violated the constitution.

“The speech by the NPD offers new material to bring forth a case to ban the party,” said Peter Porsch, fraction leader of the post-communist Party of Democratic Socialists (PDS).

In the past the federal government has been unable to succeed in banning the NPD on grounds that it undermines the German constitution by maintaining close ties to Neo-Nazi circles. The most recent attempt to outlaw the party failed in March 2003 after the Federal Constitutional Court ruled the use of undercover informants created bias in the government's attempt to ban the NPD. The informants -- federal intelligence agents -- were also unwilling to disclose their identity by appearing in court.

Since then, Berlin has been unable to stop the growth and spread of the party, particularly in the former East, where it has fed on local frustration with unemployment and the reduction of social welfare payments.

The party’s speech in Saxony’s parliament will now be examined to determine grounds for new legal action against the NPD, the state attorney general in Dresden said.

The Greens and conservative Christian Democrats have said the statements should be viewed as a call to racial hatred. Karl-Heinz Gerstenberg, state fraction leader for the Greens, said the NPD speech reeked of racial insults and extreme right-wing ideology.

Preaching racial hatred and denying the Holocaust are both against the law in Germany. Earlier in the week, Germany called on the European Union to adopt a ban on all Nazi symbols.

Germany's far-right groups, the National Democratic Party (NPD) and the German People's Union (DVU), have officially joined forces to fight the 2006 general election as one. (Jan. 17, 2005)

Who's to Blame for Far-Right Extremism?

There's plenty to blame for the rise of extremists in Germany: Ex-communists, unemployment and social reforms all had their turn. Now it's the nation's highest court that tops the list. (Sept. 18, 2004)