Families of murdered journalists demand inquiry | Asia| An in-depth look at news from across the continent | DW | 08.02.2013

One year has passed since the killing of Sagar Sarowar and Meherun Runi, a journalist couple living and working in Dhaka, Bangladesh. The families of the two journalists are now demanding an international investigation. 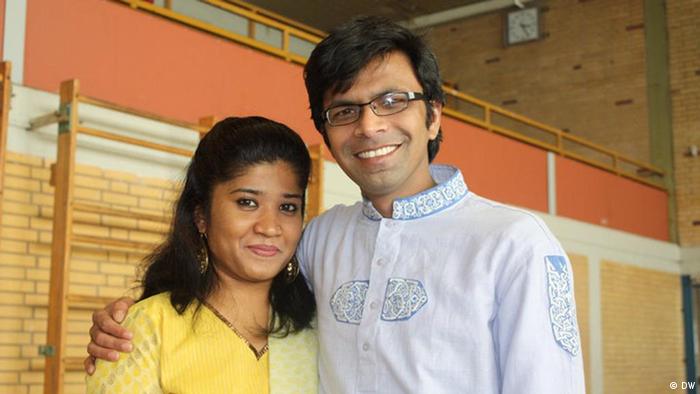 When Sagar Sarowar, television news editor at Maasranga TV, and his wife, Meherun Runi, a senior reporter for ATN Bangla, were murdered on February 11, 2012, the then Home Minister Shahara Khatun promised the killers would be captured within 48 hours. Prime Minister Shaikh Hasina promised personally to look after their orphaned six-year old son Megh.

One year later Information Minister Hasanul Haq Inu describes the handling of the case as a "disgrace for democracy". He insists that the "government has been trying to ensure that the scar is gradually removed." So far, however, the police have been unable to establish a motive or name any suspects. Media speculation focuses on the fact that Runi may have been researching energy sector corruption involving powerful political figures and that the killers' motive could have been to remove the evidence from their flat before it could be published. Sarowar had earlier told friends he was planning to publish a book violence against minorities in Bangladesh, which could "cause a sensation." The manuscript is believed to have been on his laptop, which was removed from the crime scene, presumably by the killers.

Runi's brother Nowsher Roman has been prominent in demanding justice for his sister and her husband: "For the last year, we have been struggling with agony, frustration and fear. Words fail to make any sense of our sufferings. All these days we have been continuously pacified by fake sympathy and promises of capturing the perpetrators and ensuring justice." 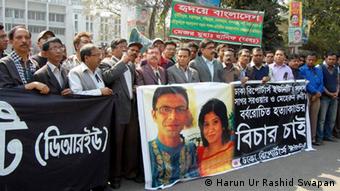 In the aftermath of the double murder, the country's journalists and bloggers staged a series of demonstrations to demand the arrest of those responsible. Since then, they have steadily lost confidence in the ability of the authorities to conduct an effective investigation and have held a string of protest marches. Journalists believe the investigation was bungled from the beginning and point to the fact that the police allowed the crime scene to be contaminated by the media and general public. DNA samples found there were only sent to a US laboratory four months after the crime when the Bangladeshi police suddenly claimed not to have the equipment required to carry out such tests.

Reporters Without Borders says a special commission of inquiry should have been set up right from the outset. Nur Khan, Director of the renowned Dhaka-based Legal Aid and Human Rights Organization, ASK, describes the delay in the investigation as "very sad." "Through consecutive DNA tests and numerous arrests the police are just killing time, nothing else." Several suspects arrested right after the crime were all subsequently released without charge.

The family of the murdered journalists has now joined the protests and is calling for an international investigation. Sarowar's mother, Saleha Munir, fears the police are not really interested in catching the culprits.

The police, under pressure from the outset to solve the case, now appear to have gone back to the beginning and have restarted interrogating the dead couple's son, Megh, the only witness to the crime. For Reporters Without Borders this is completely unacceptable: "Repeatedly interrogating a six-year-old child who is already traumatized by his parents' murder is an illegal and inhuman act that defies all rational logic." According to Deutsche Welle's BOBs prize winner Abu Sufian, "the child is already a traumatized kid."

Working as a journalist is a dangerous job in Bangladesh despite some progress being made towards democracy in recent years. The country is ranked a lowly 144th out of 179 countries in the 2013 World Press Freedom Index, 15 places lower than in 2011. Reporters Without Borders has repeatedly drawn attention to the worsening situation. Recently a prominent blogger was stabbed, allegedly by religious extremists. Moreover, several journalists have been killed and others have been illegally arrested and beaten by the police. Threats have been made against investigative reporters and even media organizations willing to publish the material. Reporters Without Borders has accused "criminal gangs" of being behind such moves but has also criticized what it sees as harassment of journalists by the authorities.

The press freedom organization is concerned at the growing violence in Bangladesh "reflected in an increase in assaults, violence and murders that go unpunished." In its latest statement it writes simply: "The killers of Sagar Sarowar and Meherun Runi, and those behind the double murder, remain at large."

A former Deutsche Welle colleague and his journalist wife were found dead in their apartment in the capital city of Bangladesh on Saturday. Police continue their investigation into the murders. (13.02.2012)