Experts Warn About Powdered Alcohol | Germany | News and in-depth reporting from Berlin and beyond | DW | 27.05.2005

Just as youth advocates hail the fact that sales of "alcopops," sweet drinks containing alcohol, are declining among kids, another product is raising concerns -- alcopops in powder form, which are growing in popularity. 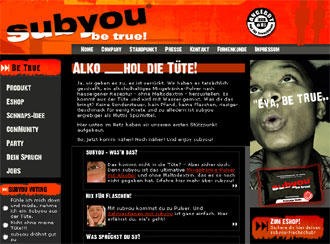 The company subyou sells its alcohol powder online as well

They look harmless enough, the inconspicuous packets often next to the cashier at gas stations, convenience stores, beverage stores and bars. But according to consumer protection officials, that's what makes them all the more dangerous, since the powder inside contains alcohol, and a lot of it -- about 4.8 percent by volume. That is the equivalent of one to one-and-a-half glasses of liquor.

The product is called subyou, manufactured by a company in North Rhine-Westphalia, and is marketed squarely at teenagers with slogans like "taste for not much dough" and "gets a good buzz going." Add the powder to cold water, and consumers have an alcoholic drink containing either vodka or rum.

"These are just as dangerous as the alcopops that came in the bottles," Birgit Rehlender, nutrition expert at consumer affairs organization Stiftung Warentest told Der Spiegel weekly.

While authorities were able to curtail the consumption of alcopops with a special tax on the drinks last August -- which put them out of the reach of many teenage budgets -- these new alcopops in powder form cost between 1.65 and 2.40 euros ($2.06 and $3.00) per package. Subyou is able to get around the tax because its product comes in powder form. 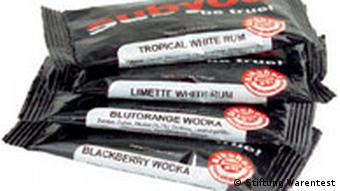 The little packets that pack a wallop

The powder was first sold over the Internet, and word spread quickly among teenage circles that those under 18 could order off the Internet without fear of being asked for proof of age. However, according to Andrea Schauff, a nutritional expert at Hesse's consumer protection organization, in many stores the powder is being sold to under-age kids even though a warning is printed on the packets: "Alcohol can be addictive -- no sales to minors."

Besides the high alcohol content, youth advocates also worry about the powder's other ingredients, including high levels of preservatives, sorbic acid, and dyes that have not been approved by health experts.

Consumer protection authorities, such as Waltraud Fesser from Rhineland-Palatinate, would like to see the special tax on liquid alcopops be applied to their cousins in powder form.

"As soon as alcohol enters into the picture, we have to protect our young people," she said.

Young Germans and Their Vices

The traditional German pastimes of boozing and smoking are no longer just the preserve of the working man. Instead they have become the pleasure of an alarming percentage of the nation's youth. (Aug. 26, 2004)

The next time you agree to that third cocktail, bear in mind that excessive alcohol consumption eats up brain cells -- particularly in women. And it doesn't take long. (May 19, 2005)