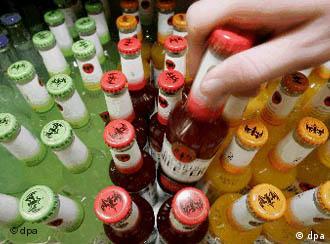 Nearly half of all alcopops sold are consumed by teenagers

Starting in August, young Germans looking for an alcoholic kick on a summer night, have to reach a little deeper in their pocket. A sin tax slapped on mixed drinks sold in cans or bottles is to blame. Instead of the €2.00 a pop they used to cost, teenage drinkers have to fork out another 80 cents (about one dollar more) for their fruit-flavored alcohol.

The German Health Ministry, which proposed the tax as a means to discourage under-age drinkers from buying the so-called alcopops, hopes the increased price will have an effect not only on the consumers, but also on the manufacturers, who notoriously market the sweet drinks to younger crowds by presenting them as cool and trendy in advertisements.

"We want to give a clear signal that we do not want people under 18 buying them," said Marion Caspers-Merck, Germany's commissioner for drug policy.

Germany is not alone in declaring a war on alcopops. Throughout Europe, politicians are taking aim at the innocent looking bottles in bright snappy colors with exotic ingredients such as tequila, lime and "organic agave cactus juice." With an average alcohol content of 5.5 percent, the drinks have been pinpointed as a major contributor to increased alcohol abuse among teenagers.

Alcopops are especially conducive to encouraging underage drinking because their characteristic sweetness masks the bitter taste of alcohol. Young people, who ordinarily would not opt for hard liquor, are now consuming it in greater quantities disguised in fruit-flavored drinks.

Doctors in Britain have put the blame for the surge in teenage drinking squarely on alcopops. The British organization Alcohol Concern has said that alcohol abuse in children and young adults is on the increase. Studies conducted at the Royal Liverpool Children's Hospital has shown that, from 1985 to 1996, there was a tenfold increase in admissions of children aged nine to 16 under the influence of alcohol.

Half of all alcopops consumed by teenagers 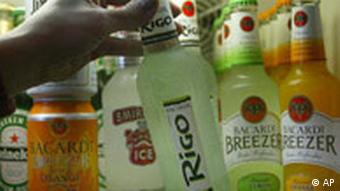 Rigo, Breezer and Smirnoff Ice are the preferred trendy drinks of youths.

According to an international study by the World Health Organization, 3.6 percent of 11 year-olds admitted to drinking alcopops regularly. At age 15, the figure jumps to almost 15 percent. In Germany, a government report last year said every second alcopop sold was purchased by 14 to 19 year-olds.

But while health officials continue to worry about how the drinks are leading to increased alcoholism among young people, the drink producers are watching their sales climb. Between 2001 and 2002, the amount of alcopops sold rose from 3 to 13 million liters (0.8 to 3.4 million gallons). The biggest markets are Germany, France, Britain, Belgium and Denmark. In Germany, sales of Rigo and Breezer -- two popular mixed drinks -- account for 56 percent of Bicardi Deutschland's turnover.

Austria is the latest country to take preventive action to curb sales of the sugary drinks. Following Germany's example, it too has decided to increase the price of alcopops. Earlier this week, Austrian Health Minister Maria Rauch-Kallat called for firm measures in the form of a tax to act as a disincentive for young people to buy the flavored alcohol. The country's treasury will correspondingly decrease taxes on non-alcoholic beverages, she added.

Although fewer teens may opt to spend more money for the drinks, not everyone is convinced that the tax is as effective as intended. The French automobile association -- quoting figures of a quarter of drunk-driving accidents committed by people between age 18 and 24 -- says a simple health tax is not enough to address the problem. It says there should be more prevention campaigns focusing on the effects of alcohol.

In Germany, though, politicians and health officials are sticking to taxation as a form of discouragement. "This is an important and sensible step," said Fritz Behrens, State Interior Minister for North Rhine-Westphalia. "Young people underestimate the dangers of apparently harmless, sweet and trendy-looking drinks." The five million euros garnered from the tax by the end of this year will be put towards developing preventive measures against alcoholism.

The days when thrill-seeking teenagers had to raid their parents' drinks cabinet are long over. In recent years, advertisers have increasingly focused on young people as the main target group for "alcopops." (Nov. 25, 2003)