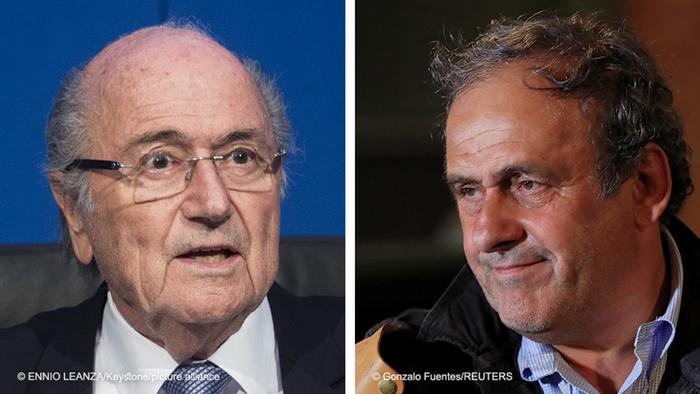 The 85-year-old Blatter, the former president of FIFA, and the 65-year-old Platini the former head of the European confederation, UEFA, were accused of offenses related to the suspicious payment of 2 million Swiss francs ($2.2 million/€1.9 million).

The charges were the result of a six-year investigation. The Federal Criminal Court in Bellinzona will have to decide whether to take the two men to trial.

Both Blatter and Platini are already under prosecution for "disloyal management," "breach of trust" and "forgery of securities" related to a case from 2011 that resulted in the duo's being banned from soccer in 2015.

The new case revolves around Platini's requesting backdated additional salary in 2011 for work he did for Blatter during the FIFA boss's 1998-2002 first term as president. Blatter had been campaigning for reelection at the time and Platini's influence among European voters was key.

"The evidence gathered by the [attorney general's office] has corroborated that this payment to Platini was made without a legal basis,'' prosecutors said in a statement.

"This payment damaged FIFA's assets and unlawfully enriched Platini,'' they added. The two men have both denied wrongdoing.

The original charges followed hotel raids in 2015 by the US Department of Justice, which led Blatter to step down as president days after starting his fifth term. Platini had been considered his natural successor, but his involvement in the raids threw his campaign off track.

FIFA's ethics committee later suspended the duo for six weeks, eventually banning them each for six years. Platini's suspension was shortened to four years and he was allowed to return in October 2019.

Blatter's poor health led to his final questioning being delayed. He is also facing a separate criminal process for the authorization of a FIFA payment of $1 million to Trinidad and Tobago in 2010.

FIFA itself has also faced heavy criticism for various scandals, including the decision to award Qatar the role as host of next year's World Cup championship. The treatment of migrant workers involved in the construction of facilities for the event has come under particularly heavy fire.