The European parliament is currently reviewing a proposal to amend the Eurodac Regulation for fingerprinting migrants. The system until now has been arbitrary and difficult to enforce. 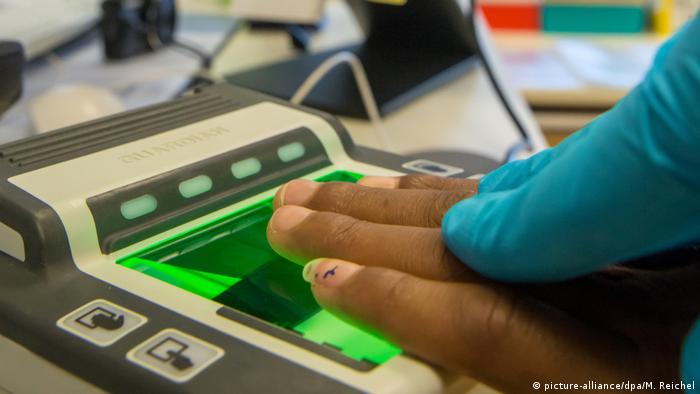 Eurodac is the electronic centerpiece of the Dublin III Regulation. When someone applies for asylum, regardless of where they are in the EU, their fingerprints are stored on the Eurodac central system.

Read more: Fingerprinting: How are asylum seekers registered in the EU?

The aim of the system is to make it easier to determine which EU country is responsible for processing an asylum claim. It is to ensure that people do not submit asylum applications in multiple countries, sometimes referred to as "asylum shopping."

The difficulty in coping with the large influx of people into Europe in recent years has been widely documented. According to Frontex’s annual risk analysis for 2016, around 1 million people traveled through the EU last year without proper travel documents. In a recent briefing on legislative reforms to Eurodac, the European Parliament described the associated problems with this situation as leading to "fears of threats to internal security, as the identity and motivation of migrants remained undetermined."

At the height of the refugee crisis in 2015, Greek authorities estimated that more than a third of the people arriving on the Greek islands were not fingerprinted . Similarly, German authorities back in 2015 could not keep up with the numbers.

According to the European Commission, over the last few years this has led to a situation where "thousands of migrants have remained invisible in Europe, including thousands of unaccompanied minors, a situation that facilitates unauthorized secondary and subsequent movements and irregular stay within the EU."

However, it has been found that those migrants who do provide fingerprints and apply for asylum in the first country of entry in the EU are subject to arbitrary decisions by member states’ border authorities.

The EU Parliament briefing explains: "Fingerprinting and Eurodac registration remain primarily a task for Member State authorities. This is regulated under national legislation, ensuring not only compliance with the regulation, but also with fundamental rights obligations resulting from EU and international law…"

There are 3 categories of people whose data can be recorded in the system according to the Dublin III Regulation. The EU Parliamentary Think Tank describes the current law : "Participating states are required to 'promptly' fingerprint all persons over the age of 14 who fall into one of the following three categories:

In addition to fingerprints, Eurodac stores information on asylum applicants’ gender and country of origin. It does not record a person’s name.

It should be noted that the data on asylum applicants (category 1) is stored for ten years, while the data concerning people irregularly crossing the border (category 2) is stored for 18 months and then deleted. The data on people in category 3 is not stored but run through the system for the purposes of comparison.

Adjunct Professor Valeria Ferraris from the University of Turin argues that member states’ categorization of migrants is arbitrary. This can be seen in the Eurodac annual report for 2016 in the difference between the numbers of migrants who were categorized as asylum seekers and those who were found to be irregularly crossing the border and those who are found to be illegally staying in the Member State. 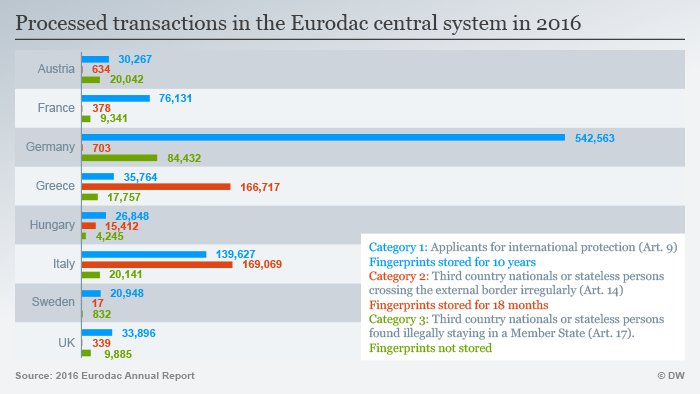 Greece and Italy, for example, have the highest number of people in category 2. After 18 months, the data recorded on these irregular migrants will be erased, meaning they can apply for asylum in another EU member state.

Professor Ferraris believes that different countries are making different decisions on the same people and randomly deciding whether they are an asylum seeker or someone irregularly crossing the border. "In effect, the only difference between them is a click on Category 1 or 2 by the authorities in respective countries, allowing for a wide margin of discretion based on each state’s attitude towards migration," she says.

A proposal for reforms to the Eurodac system is still being reviewed by the European Parliament. If the changes to the existing scheme become EU law, they will include the following:

Human rights groups have taken issue with the fact that asylum seekers are treated as criminals whose data is available to Europol – and now possibly third countries.

However, until the irregularity on determining which category people should be put into is addressed, these reforms will merely reinforce an already flawed system, where people’s fates are arbitrarily decided by member states' border control.

Germany's migration agency has urged regional authorities to fingerprint all refugees. The measure seeks to rule out the use of multiple identities and prevent possible benefit fraud. (07.02.2017)