With the success of its first Mars probe, the planned launch of the Galileo satellite navigation system, Europe is emerging as a global space power. But does it have a chance of beating NASA in the space game? 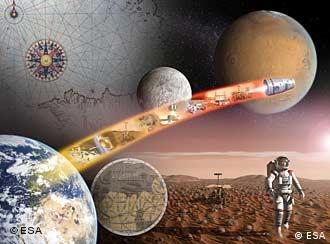 Like Washington, Europe also wants to send astronauts to Mars.

Part one of a three-part special report:

Last Christmas, the scientists at the European Space Agency's mission control in Darmstadt, Germany, burned the midnight oil. Bleary eyes scanned flickering monitors for signs that the agency's first Mars lander had arrived safely. If things had gone according to script, the Beagle 2 would have sent back a signal playing a short ditty by the British group Blur. But instead of doing a celebratory dance to a pop tune, ESA scientists sat stunned as the computers broadcast nothing but an ominous silence

"It was very tense," David Southwood, the affable, white-maned head of science at the European Space Agency admitted. "We had really committed ourselves to something, and this was the first time the wrong thing happened and we had a null result."

A few weeks later, ESA gave up the search, declaring Beagle dead on arrival. But a guardian angel appeared to be watching over the scientists. Almost as quickly as the news of failure came, the agency chalked up its first Mars success. On Jan. 19, the agency, which includes 15 European member states, released the first spectacular images from the German-designed, high-resolution camera carried by its Mars Express probe, which began orbiting Earth's closest neighbor the same month. 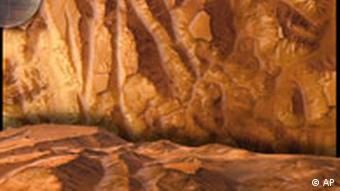 An image of Mars' grand canyon, the Valles Marineris, taken by the German-developed high-resolution stereo camera on board Mars Express.

"Seeing the pictures, I thought: We've really done it," Southwood said. On the next day the pictures, which had been beamed down from space, were splashed across the front pages of European newspapers. Four days later, ESA scored another triumph: Mars Express had detected frozen water on the Red Planet.

Europe comes into its own

Over the past 18 months, Europe's space science ambitions have begun to crystallize. Besides Mars Express, the agency has volleyed the comet-chasing Rosetta spacecraft halfway across the solar system, sent a probe to the moon and shuttled European astronauts to the International Space Station.

Behind the steady stream of projects tailor-made for National Geographic, something more profound is unfolding in Europe. In an increasing number of areas, ESA is starting to give the United States space program a run for its money.

"There's a recognition in the U.S. that Europe has very strong space capabilities," explained James Lewis, director of technology public policy at the Center for Strategic and International Studies in Washington. "We're in a crux period here as we are in other aspects of the transatlantic relationship about whether we will work cooperatively or competitively."

As the chairman of the European Parliament's Sky and Space Intragroup, Gilles Savary of France is an outspoken champion of an expanding European space program. He said rivalry with the U.S. is healthy: "It is competition, but competition is sometimes good because it stimulates technology and promotes performance."

NEXT PAGE: A new constellation

Long taboo, European Union leaders now want to foster the growth of a Europe-wide defense industry. If Brussels succeeds in consolidating the sector, it could be a major boon for the space program. (June 27, 2004)

ESA and the EU

In the past year, the European Union drafted its first space policy and even defined it as a fundamental priority in the draft constitution. Its new partnership with ESA could give new momentum to European space dreams. (June 27, 2004)

The European Commission's homepage for news, reports and other information about the European Union's space policy.