The global solar panel market has been flooded with hardware from China. European designers believe they can remain competitive by creating innovative systems that are also pleasing to the eye. 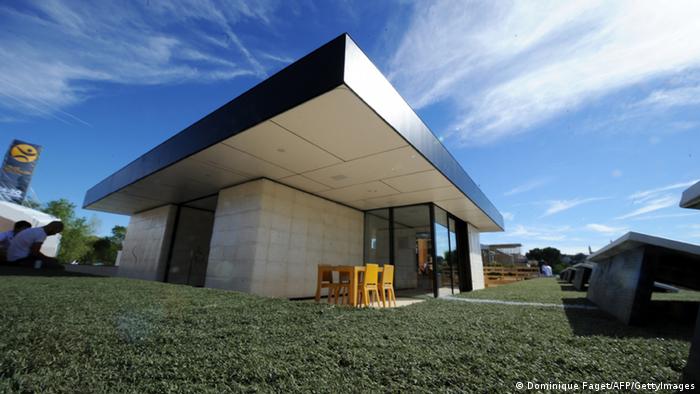 Solar power incentive programs have triggered a boom in renewable energy technology across Europe and North America. This is an important step towards reducing greenhouse emissions produced by the skyscrapers, apartment buildings and office blocs we use each day. But while sticking solar panels on roofs and improving insulation on the windows are steps in the right direction, experts say new, innovative building techniques and technology are needed.

Livio Nichilo, an engineer with Internat Energy Solutions says that each element of a building is thought of differently. He explains that lighting, cooling and heating are all separate components. 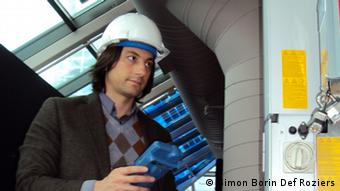 Each architectural element needs to be thought of together, says Nichilo

"The reality is that in order for this to function properly, all of these pieces need to be working together," he told DW in an interview.

One good way to reduce greenhouse gas emissions from buildings is to improve their use of renewable energy like solar and wind power. But Nichilo says energy efficiency is also extremely important. Simple adjustments can make all the difference. For example, heaters on the higher levels of tall buildings can be turned down because heat naturally rises. You can also create something called a double skin on building facades. This is like a shell that uses air space between layers of glass as a form of insulation.

Nichilo and his firm were responsible for the building shell at the EnWave Theater in Toronto, Canada. The sea-blue, wave-shaped solar glazing, the first comboof photovoltaric in the world, has an integrated heat-mirror which produces energy that is then used to light the theater.

Nichilo says the skin cuts electricity costs by around $6,000 (4,470 euros) a year. He thinks with a few changes to the way heat movement occurs within the building, they could double their savings each year. 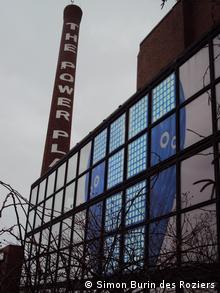 Integrating design and aesthetics into energy-producing building shells is an approach Peter Erk is keen to research. Erk, head of organic photovoltaic research at Basf Research in Germany, is developing organic solar cells. His invention uses colored dyes with carbon-based semi-conductor properties to absorb light and convert it into electrical power.

The advantage of this technology is that the panels are light, sit easily on building tops, and are able to be rolled for easy transportation. They are also quite pleasing to the eye. Erk says the energy producing films are placed between window panes and produce a geometric stained glass effect.

Because they are colored, these panel produce less energy than the regular black-blue silicon versions. But, Erk believes preserving the visual integrity of the building is important enough to justify the reduced absorption.

While colored organic dye panels are one promising technology to make solar energy visually more pleasing, another technique is being developed in Spain that makes 'invisible' energy-producing panels.

Ilaria Eriolfo is a PhD student in Architecture and Building Design at Madrid's Politecnico. He is part of a Spanish team that uses water inside windows to control indoor temperatures. The Active Glazing System uses three window panes with water between the interior and middle pane and air between the middle and exterior panes.

This is a relatively low-tech way to insulate windows, but also offers the opportunity to harvest energy passing through the panes to heat, or cool, interiors. In summer, the water between the panes absorbs heat and is then cooled in a closed circuit pipe. In the winter, the sun heated water inside the panel can be used to directly heat the room.

"You don't see the water," Eriolfo says "because the two glasses are transparent and you also don't see the movement of the water, but you can feel it when you are in the space." 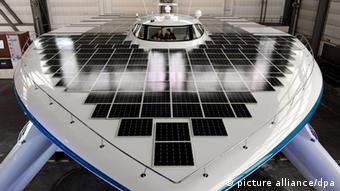 Innovators are creating technology unable to be mass produced, like this solar boat

This shift has happened because the photovoltaic business is in a crisis, Henning told DW. An overproduction of solar panels worldwide, driven by large factories in China, is to blame. Henning says the glut in the market is forcing European designers and energy experts to come up with creative energy-efficient technologies that can't be copied and mass produced in a Chinese market.

Torontoengineer Livio Nichilo welcomes these new developments. "The architectural or artistic aspect of the building is everything. And if you think of it, why not demand that of architects and engineers?"

A European organization of solar glass producers has filed another protest with the European Union over what it considers to be Chinese dumping policies. State subsidies are at the heart of the dispute. (05.02.2013)

The Indian township of Auroville was founded in the 1960s as a “living laboratory”. People from more than 40 nations aim to live in harmony with nature and are trying to protect the environment as a community. (05.02.2013)