European Press Review: Betancourt′s Rescue Fatal for the FARC | Europe| News and current affairs from around the continent | DW | 04.07.2008

French-Colombian politician Ingrid Betancourt arrived in Paris on Friday after six years as a captive of FARC rebels in Colombia. The European press said the rescue signalled the beginning of the end for the FARC. 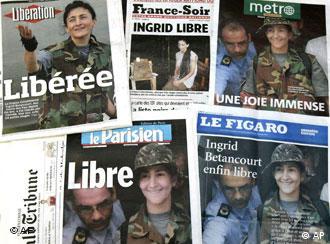 The media has followed the case closely

Two days after her spectacular rescue from the Colombian jungle, Betancourt was met by President Nicolas Sarkozy at an airbase near Paris on Friday, July 4. The European press saw clear winners and losers in the hostage ordeal, in which Betancourt and 14 other hostages were rescued by the Colombian military.

The Parisian newspaper Figaro said that Betancourt's release signals that the end of the Marxist group is in sight. The newspaper said several events have weakened the group recently, particularly the deaths of Manuel Marulanda and Raul Reyes. The ties between the FARC and Venezuelan President Hugo Chavez also led to a loss of credibility, the newspaper said.

"The FARC is in a crisis...We will live to see the end of the last guerrillas in Latin America," the newspaper predicted.

The Independent of London also noted that the hostage release was the latest of several blows that "may just hasten the demise of the Marxist guerrilla group FARC, which has blighted the country's politics for more than four decades."

"The freeing of Ms. Betancourt has removed FARC's biggest bargaining chip to extract the concessions it has long sought -- a prisoner exchange involving the release by the government of captured FARC rebels in return for the hundreds of hostages held by the group, and creation of a demilitarized safe haven for the group in the south of the country," The Independent wrote.

"Increasingly, FARC's existence is a self-perpetuating futility. Its fighting force, now perhaps only 8,000, is half or less what it was in the group's heyday," the newspaper said. 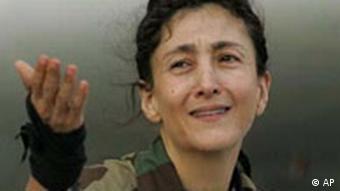 The conservative Norwegian newspaper Aftenposten said that the freeing of Betancourt was an important step in the fight against FARC terrorism, but that it would be a mistake to think that Colombia's problems have been solved.

"But the war has not been won," the newspaper wrote. "The FARC has hundreds of hostages in its grip. The attention on Betancourt in the last years has distracted general attention from Colombia's largest tragedy. Four million people live as refugees in their own country. After Sudan, Colombia is the country in the world with the most refugees."

Spain's newspaper El Pais said that the FARC is "in freefall." Betancourt's release will help President Alvaro Uribe win the upcoming elections, the newspaper said. But it is also an opportunity to bring peace to Colombia.

"The return to life of the ex-presidential candidate plants the fundamental question as to whether it will represent the start of a peace process that will put a definitive end to what has been an authentic civil war in rural Colombia for more than half of a century." 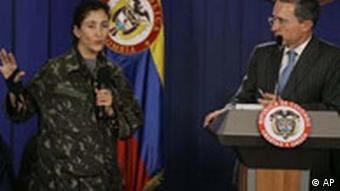 Many newspapers saw both Colombia's Uribe and France's Sarkozy as gaining a political boost from Betancourt's release.

The Berliner Zeitung agreed that Uribe comes away from the situation a winner and Chavez the loser.

"The winners and losers in this chess game have been determined. Besides Uribe, the winner is the government in Washington. The losers leaving the table are Venezuela's President Hugo Chavez and naturally the left-wing FARC rebels. The end seems near since the release and the hard losses in recent months."

Sarkozy deserves at least some of the credit he will try to take for Betancourt being freed by guerrillas, the French left-wing Liberation newspaper wrote, in a rare tribute to a right-wing leader.

"Pressure placed by Sarkozy certainly convinced the Colombian president to do everything possible to free Ingrid," the newspaper said.

DW-WORLD.DE spoke with Carsten Wieland, head of the Colombian branch of the Konrad Adenauer foundation about the dramatic rescue of Ingrid Betancourt and 14 other hostages from their FARC captors. (03.07.2008)

World leaders were united in celebrating the release by Colombian forces of French-Colombian politician Ingrid Betancourt and 14 other hostages from FARC rebels on Wednesday, July 2. (03.07.2008)

E-mails recovered from the laptop of a slain Colombian rebel leader, regarded as a terrorist in both Europe and the US, reveal contacts with a radical leftist German politician (26.05.2008)