European newspapers have almost unanimously condemned Israel's retaliatory offensive against Lebanon as "out of proportion." 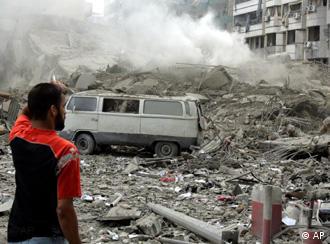 France's Le Monde said Israel's response to the capture of two of its soldiers by Hezbollah militants is out of proportion. "As always, Israel... is responding by making disproportionate use of military force, in violation of international law." It argued that the result is an impasse in the Palestinian territories, in Lebanon and for Israel itself, since the country cannot secure the release of its soldiers or prevent the firing of rockets from Gaza or southern Lebanon.

Belgium's De Standaard described Israel's reaction as "an act of war" and agreed that it was "completely disproportionate"."Even in wars and conflicts there are proportionate measures," it said. 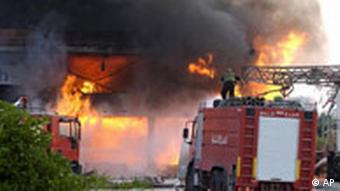 Most European papers say Israel's reaction has been too harsh

Spain's El Mundo believed Israel has reason to feel threatened but added that the solution to the "terrorist provocation" does not lie in "massive indiscriminate attacks on its neighbor."

The Netherlands' Trouw said Israel was in a bind. "Israel is threatening to be dragged into a conflict from which it will be difficult to withdraw," it said. "The experience teaches us that it's not the terrorist movements that will lose support through Israel's actions, but rather that the hatred towards Israel will increase."

Austria's Die Presse said it wasn't Israel but rather the radical Hezbollah that was primarily responsible for the Lebanese malaise. "There is no justification for the militants of the 'Party of God' kidnapping Israeli soldiers: Israel completely withdraw from Lebanon six years ago, so it wasn't an occupying force anymore," it said. At the same time the paper added that Israel reacted too hastily. "It would have been more sensible to wait in order to make the Lebanese population and also the world more aware of Hezbollah's wrongdoing," it contended.

"Middle East war looms", read a headline in Germany's Süddeutsche Zeitung .It too said Israel's reaction was "disproportionate" but added that every country has the right to defend itself against attacks by terror groups. "The war was declared by Hezbollah and Palestinian terror groups, not by Israel," it said.

Amid spiraling Mideast violence, several governments, including Germany's, have warned their nationals to stay away from Lebanon. Members of a German-Lebanese family were reportedly killed in Israeli strikes. (July 16, 2006)

Along with other European nations, Germany is attempting to de-escalate the raging Middle East conflict amid fears the crisis could explode into a regional war. (July 16, 2006)

Who has what interests in the escalation of violence in the Middle East following a phase of relative quiet? An analysis by Deutsche Welle's Mideast expert Peter Philipp. (July 15, 2006)