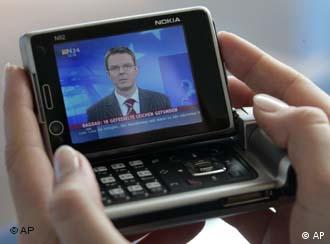 German experts say online traffic has doubled in a year

By the end of 2015, Internet data traffic in Europe will have increased twentyfold compared to today's levels, driven largely by increases in the data-heavy streaming of HDTV content, according to the managers of DE-CIX, a central Internet node based in Frankfurt.

This node carries data from some 400 Internet service providers based in more than 40 countries. During peak times, 1.4 terabits of data now pass through DE-CIX each second, as compared to 700 gigabits one year ago. The center is equipped to handle up 40 terabits per second.

Frank Orlowski, of DE-CIX Management GmbH, said Germans can expect fiber-optic connections directly to their houses in the future, but how long that will take, is difficult to predict. 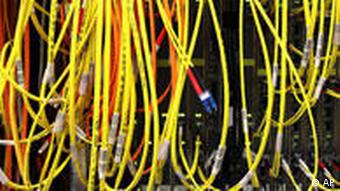 "In Germany we have the difficult task ahead of us of digging up all that copper wire which has been in the ground for decades and replacing it with fiber optic cable," he told Deutsche Welle. "That's not only a challenge for Germany - other European countries have to do the same."

Average monthly data use per broadband subscriber in Germany is reportedly around 12 gigabytes, as compared to 19 gigabytes in the United States and some 40 gigabytes in South Korea.

In the United States, some 20 percent of Internet traffic is already dedicated to the streaming video service Netflix during television prime time.

And the capacity hogs of the future are less likely to just be personal computers, as sales of Internet-enabled televisions, television set-top streaming devices like the Apple TV box, and HD-capable mobile devices are flourishing, DE-CIX added in a statement.

According to DE-CIX, HD streaming broadcasts are contributing to a yearly doubling of Internet traffic.

Once again, a slew of bad numbers had come out showing the future of the music industry is anything but secure. As the sector’s biggest players meet in southern France, fighting music piracy will top the agenda. (21.01.2011)

Content Connect lets ISPs that buy bandwidth from BT to charge for faster access to some content. Company claims to support net neutrality, while Internet advocates call the move 'disturbing.' (05.01.2011)

A new satellite will provided high-speed Internet access to millions of Europeans. The British-made satellite will have a throughput of 70 gigabits per second. (27.12.2010)