European divisions on Libya hold up US, NATO leadership decisions | World| Breaking news and perspectives from around the globe | DW | 23.03.2011

European divisions on Libya hold up US, NATO leadership decisions

Divisions between European Union member states are delaying critical decisions on leadership of the Libya campaign and contributing to the EU's inability to present a united front in almost all aspects of the operation. 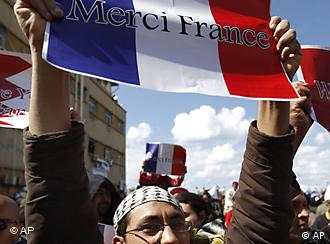 Europe's role in Libya is more complex than the rebels know

With the United States agitating for a decision to be made on which nation or international body should take over its lead role in the coalition enforcing UN military action against Libya, the European Union has so far remained quiet on the issue despite many of its member states being involved in varying capacities.

US President Barack Obama is hoping to hand over US command of Libya operations to allies within days but has become frustrated at the inability of EU heavyweights France and Britain to agree on a new structure for military operations amid divisions over what role NATO should play.

With decisions on European involvement in the UN-mandated coalition being taken at a member-state level, analysts say that the EU itself appears to be remaining silent on the command issue due to its current inability to present a united front on Libyan military operations.

"The EU as a whole does not have a specific position on the handover in command for the military operation, since some member states, in particular Germany, oppose that military operation," Daniel Keohane, a security and defense expert at the European Union's Institute for Security Studies (EUISS), told Deutsche Welle.

Richard Gowan, an EU and UN expert at the European Council for Foreign Affairs, said that while the EU was remaining publicly tight-lipped on the leadership issue, there were private concerns over the insistence of the US to take a back seat.

"A significant number of EU members have provided forces for the coalition but European planners will be very nervous at the idea of America reducing its participation," he told Deutsche Welle. "The Europeans have the military resources to sustain operations for some months, but doing so without clear US leadership will be a major political challenge."

Gowan added that while European commentators may complain about America's shifting position, they have to recognize that a crisis so close to Europe is primarily the EU's responsibility. "The EU's claim to play a global security role has been badly damaged by recent events and will be eroded further if European leaders fall out over what to do next," he said.

The divisions within the European Union are not only preventing the bloc from making a united decision on the command of Operation Odyssey Dawn but also on what role - if any - the bloc will take as the conflict in Libya unfolds.

"The EU will not take any lead in this or any operation since the member states are so divided," said Keohane. "It is for similar reasons that NATO has not been able to take a lead either. But it is important to differentiate between Europeans, some of whom are participating in the operation and the EU, which as a body is not participating. Some Europeans could lead the operation, for example France."

So far the EU has refused to commit to any direct military intervention against Libya but has made it clear that it would be ready to mobilize its military and civil defence assets to protect a humanitarian mission if requested to do so by the United Nations.

However, while staying out of the conflict as a single body, the EU has effectively passed responsibility to its individual member states to decide whether to take part in enforcing the no-fly zone and arms embargo on Libya. In turn, the opposing stances between the member states have created the usual problems in the EU, setting European nations against each other and paralyzing the bloc's ability to function as a unified whole.

Just how the EU's European External Action Service (EEAS) would be able to extract a common agreement on how to engage its military and civil defense assets in such a divisive climate is a matter of some debate, although most experts believe the humanitarian aspect would have a galvanizing effect.

A possible naval mission to police the UN arms embargo against Libya has already been mooted but EU diplomats revealed in anonymous statements to the media Monday that this has been ruled out. Instead, a less ambitions option had been put to EU foreign policy chief Catherine Ashton who has now been asked to plan for naval "humanitarian assistance/civil protection operations." 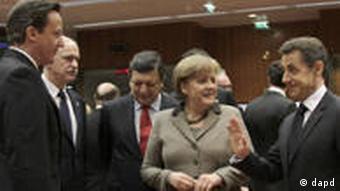 The EU is struggling to find one voice on Libyan matters

"While the EU may support a humanitarian operation in theory, this would hardly be risk-free in practice," Gowan said. "Gadhafi's forces could claim that EU planes and personnel bringing in emergency aid are legitimate targets after European airstrikes."

"What happens if Gadhafi snatches 10 or 20 EU personnel involved in the relief effort and threatens to harm them if airstrikes continue? As far as possible, aid should be directed through obviously neutral players like the Red Crescent not via the EU."

Away from the humanitarian factor, the fact remains that the EU's main powers remain at odds with each other over the main issue on the agenda: military action against Libya. Britain and France - which currently co-lead the coalition - remain committed to airstrikes and enjoy the support of Belgium, Denmark, Greece, Italy and Spain.

Arab concern over the strength of air strikes has unnerved critics in the EU, specifically Germany

However, Germany - the sole European abstainer at the UN vote which agreed on military action - remains staunchly against the campaign and has recently cited growing unease in the Arab League over the "excessive" nature of the air raids, especially those conducted by France, to justify its stance.

While Germany remains the strongest critic within the EU, other nations such as Sweden and Luxembourg are also reported to be having reservations and will only commit to involvement should the mission come under a NATO umbrella - yet another divisive point between EU members.

French Foreign Minister Alain Juppe has said that the Western military alliance had a bad reputation in the Arab world and its involvement would alienate the Arab League whose support is considered a priority.

Others say that NATO would ensure better international coordination in the operation and would prevent air raids from overstepping what is prescribed by the UN resolution, a fear shared by many of the wavering EU member states. Italy's Foreign Minister Franco Frattini went so far to say that if NATO did not take over quickly, Italy would consider closing off access to its bases in the Mediterranean.

As the UN-backed coalition seizes control of Libyan airspace, Washington maintains that Gadhafi must leave power. But past no-fly zones in Bosnia and Iraq suggest that air campaigns have a limited impact on the ground. (23.03.2011)

Libyan strongman Moammar Gadhafi has said his forces will win the battle against the West by any means, as the international community continues to argue over who will assume operational control. (23.03.2011)