Germany has taken back the European title for men's high jump and women's long jump with two home-crowd wins. For the long jump, German record holder Heike Drechsler was on hand to see her successor's win. 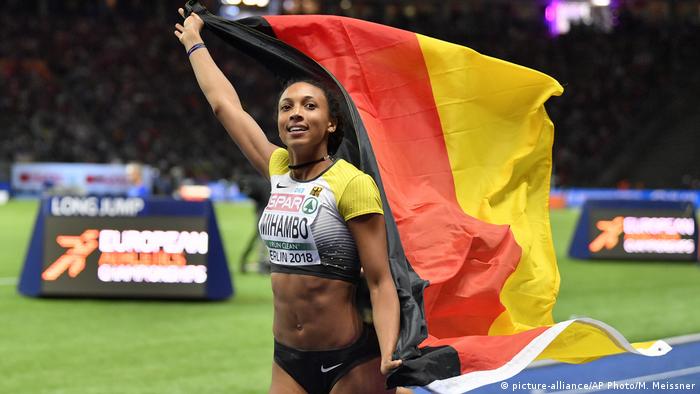 Their wins brought Germany's total medal count to 17 on the penultimate day of competition.

High jumper Przybylko from Leverkusen took Germany's first gold medal in the discipline at the biennial event since Dietmar Mögenburg's 1982 win in Athens.

The competition record is 2.36 meters set by Russian Andrey Silnov at the 2006 Gothenburg games.

Long jumper Mihambo brought the European title back to Germany with a 6.75-meter leap, 20 years after legend Heike Drechsler took home the gold. The two-time Olympic champion actually witnessed her successor's victory up close in the jump pit as a referee. Drechsler's 7.30 meters for East Germany still stands as an event record.

Germany has also won gold in women's and men's javelin and the men's decathlon.

Germany has the most overall medals, but is trailing Poland by one gold.

The inaugural event isn't even over but organizers of the European Championships say interest in the next one is sky high. Hamburg is reportedly among the cities interested in 2022, while several sports wish to sign up. (09.08.2018)

Christin Hussong set a new competition record at the European Championships to win the javelin competition. Kristin Gierisch also collected a medal after jumping a personal best in triple jump. (10.08.2018)