A massive cleanup operation is underway after Storm Zeynep — known as Eunice outside Germany — carved a deadly trail across Europe. Several people were killed. 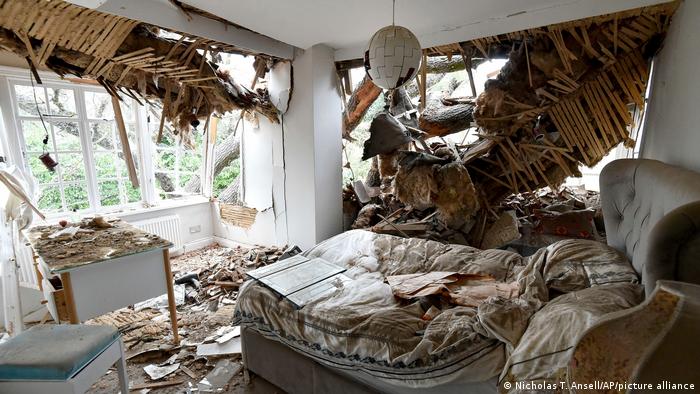 Zeynep was the second major storm to hit Germany in days, where it caused injuries, property damage and killed at least three people.

The German Weather Service (DWD) lifted all gale-force wind warnings for the country on Saturday morning, but warned there could still be high winds.

Where in Germany did the storm hit?

Other parts of the country, including Feldberg in the Black Forest (137.5) and the Grosser Arber in Bavaria (130.7) also recorded gale-force winds.

Elsewhere in Germany, a man died after falling when trying to repair a damaged roof.

The storm hit northern parts of the country early Saturday. The North Sea German island of Wangerooge lost about 90% of its bathing beach during the night.

Germany's national train operator Deutsche Bahn halted long-distance and regional services in the north of the country until at least Saturday evening.

The stoppage of regional services affected Schleswig-Holstein, Hamburg, Lower Saxony and Bremen, as well as parts of North Rhine-Westphalia.

Eunice caused considerable damage and disruption across southern parts of the British Isles, where at least three people were killed.

The storm triggered a rare "red warning," indicating danger of life in some areas, including London — the first time such an alert has been given for the capital since the warning system was introduced in 2011.

The accounting firm PwC on Friday said it estimates the storm would likely cause insurance losses of as much as 200 to 350 million pounds ($272-$476 million, €240-€420.3 million) in property damage, business and travel disruption in the UK.

One death was reported in Ireland, with a man suffering fatal injuries after being hit by a falling tree while clearing debris from the storm, according to national broadcaster RTE.

The island of Great Britain was badly hit after Eunice made landfall in Cornwall, with widespread damage reported in both England and Wales.

More than 200,000 homes were hit by power cuts across southern England but also in the east in south Wales.

In London, the domed roof of the O2 Arena, a prestigious music venue, was severely damaged by high winds. 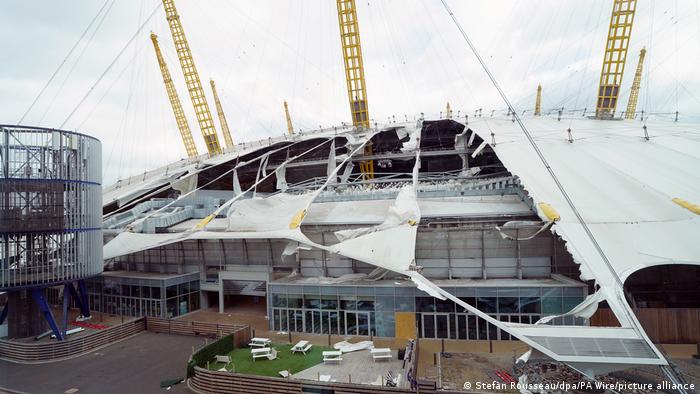 Train services in the south of England were also disrupted or canceled, and several landings at Heathrow Airport were aborted because of the high winds.

Hambling said the coastguard received multiple reports of individuals, some with children, doing just that.

The Met Office said the Isle of Wight registered a gust of 196 km per hour, a provisional record for the strongest ever recorded in England.

Meteorologist Peter Inness of the University of Reading in England attributed the storms to an unusually strong jet stream over the eastern Atlantic Ocean. Inness said such high-altitude winds could reach up to nearly 321 kilometers per hour.

The French weather service had issued a severe weather warning for five departments in the north in anticipation of the arrival of Eunice. Railroads suspended regional traffic in the northernmost Hauts-de-France region and in Normandy from midday on Friday. 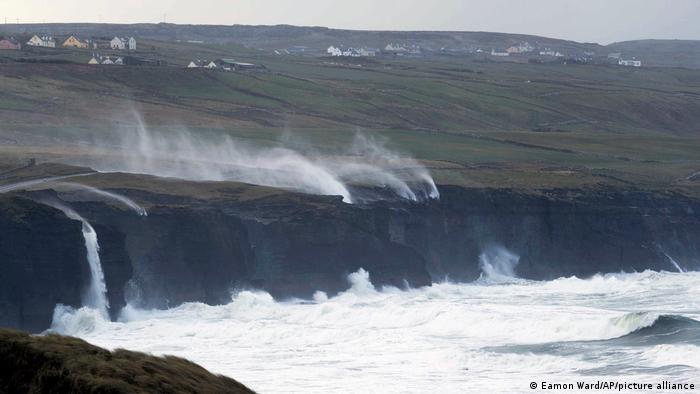 The storm has lashed its way across Europe, first hammering Ireland, then moving westward

In the Netherlands, the most severe level of alert, code red, was called for in large parts of the country, particularly for coastal areas.

Rail traffic was also stopped, and schools closed in many areas.

Amsterdam's Schiphol airport announced cancellations and delays, with national carrier KLM canceling almost 170 flights to the air traffic hub because of the storm.

In Belgium, high winds knocked over a construction crane, sending it crashing through the roof of a hospital in the town of Tournai.

One man died in the city of Ghent after being hit in the head by a flyaway solar panel.

Poland still had 1.1 million customers without electricity on Saturday afternoon, officials said, after the country's northwest took a battering

"I appeal to you: please stay at home!" Prime Minister Mateusz Morawiecki said in a Facebook post.

And in Denmark, strong winds prompted authorities to ban light vehicles from crossing the Storebaelt tunnel and bridge that links the central island of Funen to Zealand, home to the capital, Copenhagen.

A week of storms

Zeynep comes on the heels of storm Ylenia, known as Dudley in international nomenclature, which caused at least three deaths and considerable disruption to transport in some regions of Germany from Wednesday evening into Thursday. 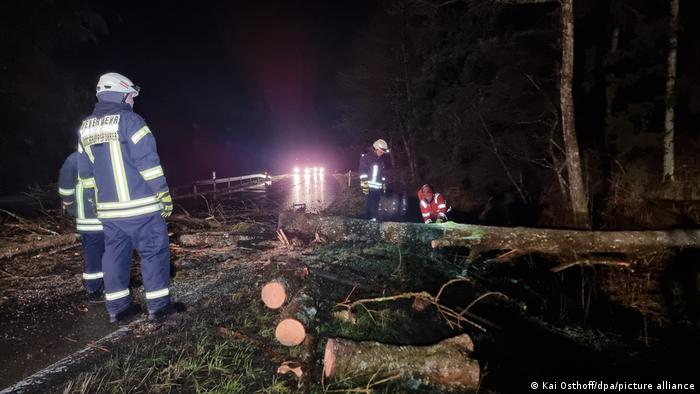 Ylenia brought down a large number of trees

Germany gives its own names to storms and high-pressure systems, with normal citizens able to choose names for such weather events for a fee.