Borussia Mönchengladbach seemed destined for the last eight of the Europa League when Mahmoud Dahoud gave them a 2-0 lead on the night. But Schalke produced a fine comeback, albeit with a chunk of luck, to progress. 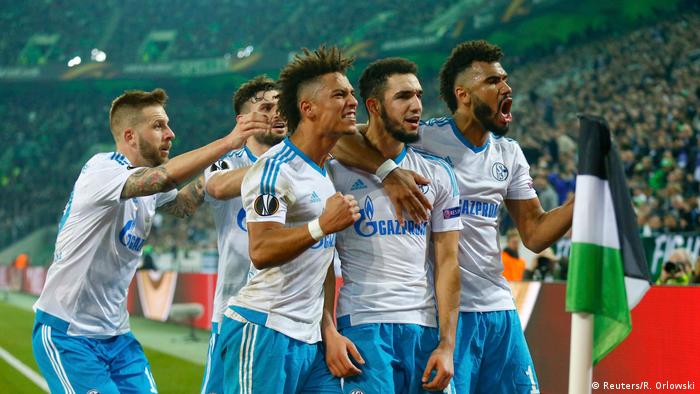 With the help of a perfectly positioned divot, Schalke produced a fine comeback to beat Borussia Mönchengladbach on away goals and advance to the quarterfinals of the Europa League.

Gladbach lost Fabian Johnson early on to a thigh injury, but that didn’t hold back the home side, who showed real intent from the off.

They created the first big chance of the night in the 18th minute when Raffael bamboozled two Schalke defenders and lifted in a perfect cross from the left, but Drmic got his header all wrong, skewing it wide when the goal was gaping.

Raffael was at the heart of Gladbach’s attacks and he found space on the edge of the box a few minutes later, but his left-footed drive drifted wide. 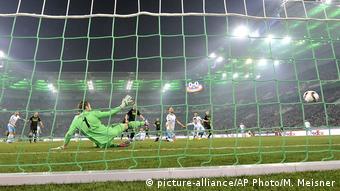 Christensen's opener set Gladbach on the path to victory, but they were denied

But it wasn’t long before Schalke buckled. A free-kick from the left was nodded down by Drmic to Andreas Christensen, whose snap shot took a huge deflection off Schalke skipper Benedikt Höwedes and bounced past the helpless Ralf Fährmann.

Schalke’s best chance of the first half fell to Leon Goretzka, who powered his way into a shooting position, but Yann Sommer got a palm to the ball to deny Schalke a swift leveler.

The best action of the first half was saved for the second minute of additional time. Gladbach broke from one end of the pitch to the other and Dahoud, still with plenty to do, unleashed an absolute thunderbolt from all of 30 metres, raising the roof at Borussia-Park.

Schalke looked dead and buried at the break but they were handed a lifeline – in bizarre circumstances. Jannik Verstergaard’s clearance went straight to Goretzka, whose low shot appeared to be heading straight to Sommer, but hit a divot and the ball looped over the keeper and into the net.

That was just the slice of luck Schalke needed, and they got some more midway through the second half when referee Mark Clattenburg pointed to the spot for a controversial handball against Dahoud.

Nabil Bentaleb sent Sommer the wrong way from the spot to make the score 2-2 on the night and give the Ruhr side the edge on away goals.

Schalke survived a late assault on their goal, with Gladbach throwing everything forward in hope of a late winner, but Schalke survived the onslaught to advance to the last eight.

Gladbach vs Schalke - as it happened:

Europa League round of 16 live: Mönchengladbach vs. Schalke

In their second meeting in six days, Schalke and Borussia Mönchengladbach met at Veltins Arena in the Europa League. Schalke fought back to draw level, but Gladbach have the advantage. (09.03.2017)