No German side has ever won the Europa League, but few have a relationship with the competition like Frankfurt's. The Eagles are riding another wave of emotion after securing a second semifinal berth in three years, 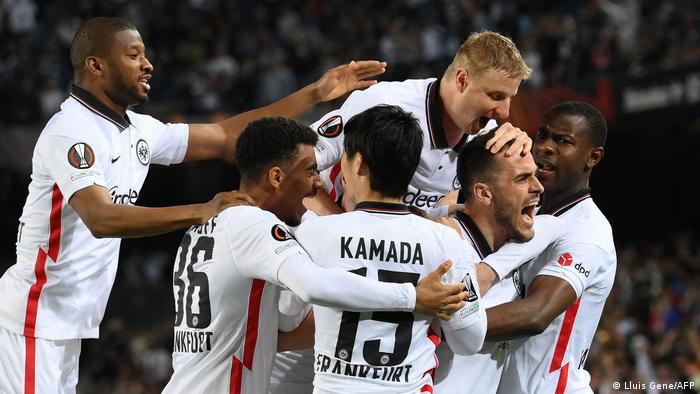 The Europa League isn't taken so seriously by some and is driven by financial gain for others, but Eintracht Frankfurt are again riding an emotional wave that shows what the competition is all about.

The pain of a penalty shootout loss to Chelsea in the Europa League semifinals from the 2018-19 campaign still lingers for the Eagles. After their self-proclaimed 'Game of the Century' this week produced one of their most famous European nights though, they will have a chance to exorcise those demons.

'Fans dared us to dream'

30,000 Frankfurt fans reportedly made the trip to Barcelona and their takeover of the Nou Camp was so impressive that their hosts are talking of launching an investigation into how so many Eintracht supporters secured tickets.

"It started with the warm up and the way we were greeted by the fans," explained Frankfurt captain Sebastian Rode. "They dared us to dream of beating Barcelona."

By full-time several of those lucky enough to have a ticket in the Catalan capital were caught in tears by the TV cameras as they witnessed their side survive a late rally to claim a 3-2 win against the European heavyweights.

"There aren't many teams that win here at the Camp Nou when Barca are in form," Frankfurt head coach Oliver Glasner told RTL after indulging in a knee slide across the pitch. "Huge credit to the players for their performance and huge credit to the fans who were here to support us the whole way.

"Everyone will remember tonight for a long time. It's extraordinary. You can't buy these kind of emotional highlights. It was a gigantic game."

To understand Frankfurt’s unique relationship with Europe, it's worth recognizing the generational divide within the club’s fan base. Those that can remember spent years regaling with tales of Eintracht’s UEFA Cup win from 1980, while others reveled in them being a regular feature in that same competition during the 1990s before they became one of Germany’s yo-yo clubs.

Their first-ever relegation in the Bundesliga era back in 1996 resulted in years of hardship and six seasons in Germany’s second tier. It also fashioned a deep appreciation for the success of recent seasons and what it means to fly the Eintracht flag in Europe.

The emotional significance of continental competition is clear to see in the home fans elaborate pre-match choreographies and a matchday atmosphere buzzing with so much energy it practically bursts through the TV screen.

In three of the last four campaigns, Frankfurt have made it to the Europa League knockout stages. Now, for a second time, they have a chance to do what many thought them capable of in 2019 and end a barren run that has seen no German side win the UEFA Cup, as the Europa League was then known, since Huub Stevens led Schalke to the title in 1997.

Martin Hinteregger still talks about the "pain" of his penalty miss that cost Eintracht in their shootout loss to Chelsea three years ago. But as they did back then, this season Frankfurt have demonstrated the value they bring to the competition on the pitch as well as in the stands.

Goalkeeper Kevin Trapp felt his teammates had shown they wouldn’t just be "cannon fodder" in Catalonia and his point was proven. Where Frankfurt's recent Bundesliga performances have lacked consistency, conviction and a clinical touch, there was no shortage of those three qualities at the Nou Camp. 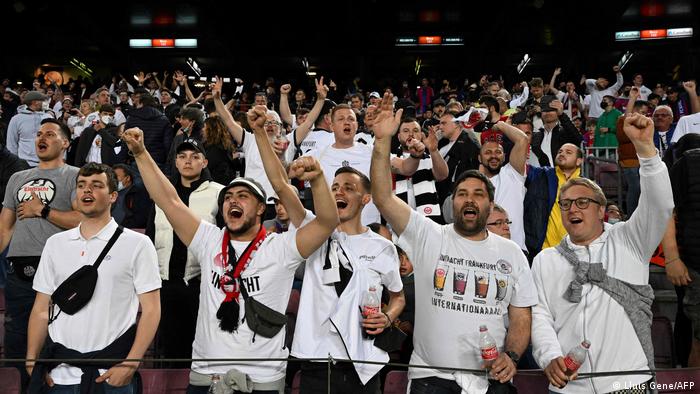 More than 30,000 Frankfurt fans traveled to Barcelona though not all made it inside the Nou Camp

Leading the charge were Filip Kostic, who scored a brace, and Rafael Borre. The Colombian silenced his critics with a stunning effort that made it 2-0.

"Nobody expected that," said goalkeeper Kevin Trapp on RTL. "Everyone thought Barcelona were going to play us off the park. We're in the semifinals and, understandably, want to go as far as possible. Two games separate us from the final and they'll be just as difficult and intense. But we've shown that we don't need to cower in front of anyone."

Frankfurt daring to dream of the Champions League

After a summer of transition, Frankfurt didn't look like a side capable of reaching the Europa League semis. The turbulence has hampered performances domestically, with "consistency" an ever-present buzzword, and their form in the second half of the season has produced just 12 points from a possible 36.

Trailing the Bundesliga’s top six by five points with five games left to play, what better way to offset potential domestic disappointment than with a shot at the Europa League title and a spot in Pot 1 of the Champions League group stage draw that would come with it? It may be Frankfurt’s best hope of securing more magical European nights next season.

See off West Ham in the Europa League semifinals, and a potential first all-German European final since 2013 against Leipzig, could decide Frankfurt’s fate. Their players and fans have poured their hearts and souls into the current campaign. Maybe this season, unlike in 2019, the ending will match the fairy-tale nature of the journey.