Italy have finished top of Group A after a 1-0 win over Wales, who reach the last 16 nevertheless. Switzerland remain likely to go through as one of the best third-placed teams following victory over Turkey in Baku. 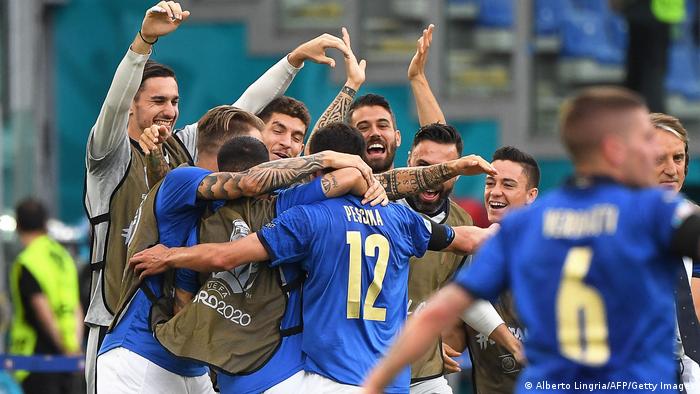 Italy celebrate the only goal of the game, by Matteo Pessina, against Wales in Rome

Italy underlined their status as one of the teams to beat in this tournament after their second-string eleven beat Wales in Rome.

With two wins already under their belt, Italy coach Robert Mancini rested several key players including Ciro Immobile and Lorenzo Insigne – but the Italians continued their fine start to this tournament. They also extended their extraordinary clean sheet record to 11 straight games, stretching back to October 2020.

The only goal of this game came in the 39th minute, a free-kick routine off the training ground as Marco Verratti cleverly picked out Matteo Pessina, who diverted it beyond the wrongfooted Wales keeper Danny Ward.

A second half red card for Wales and former RB Leipzig defender Ethan Ampadu, who at 20 becomes the youngest player to be shown a straight red in a European Championship, saw Wales' chance ebb away further – and Gareth Bale spurned a fine opportunity to salvage a draw.

But with four points, Wales finish second in Group A and are likely to play Finland, Russia or Denmark in Amsterdam on June 26.

Switzerland finish third in the group but remain likely to progress following their win in Baku. 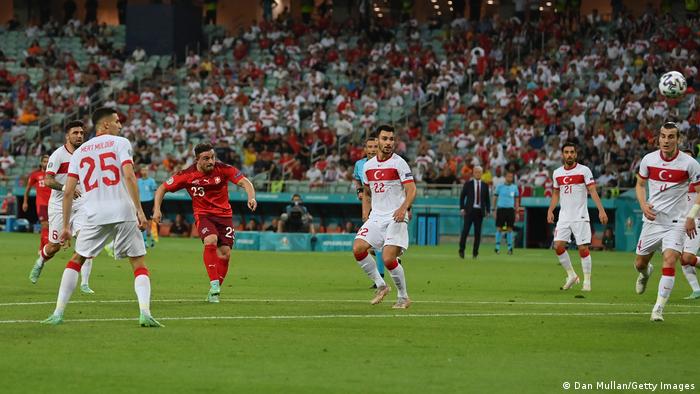 Xherdan Shaqiri thunders home the first of his two goals against Turkey in Baku.

Swiss roll over Turkey in Baku

Switzerland must hope that other results go their way in the next few days, but appear likely to join Italy and Wales in the last 16 following a rousing 3-1 win over Turkey, who go home having lost all three games and scored just one goal – a consolation in Baku.

Knowing only a win would do, Switzerland got up and running with a screamer from former Eintracht Frankfurt striker Haris Seferovic, who lashed in from distance. Xherdan Shaqiri added another fine goal to double the Swiss lead and, despite a beautiful strike by Irfan Kahveci for Turkey, Shaqiri added his second and Switzerland's third to secure the points.

Turkey bow out of the tournament having produced three poor performances in a group from which they were expected to progress — but Switzerland are still alive.