EU Urged to Speed Up Afghan Police Mission | Europe | News and current affairs from around the continent | DW | 10.12.2008

Afghan and EU leaders have called for the bloc to commit the 400 security instructors it promised to Afghanistan. But even if Brussels does hurry up the process, the numbers could be far too few. 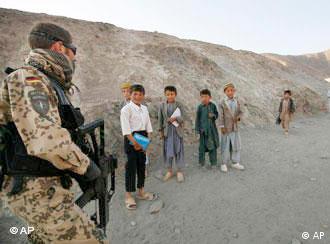 The pleas came as Afghan Interior Minister Muhammad Hanif Atmar was in Brussels for consultations with EU officials.

"I came here to seek support for our new programme for police reform and police strengthening in Afghanistan," he told reporters. "Some of those programmes will have to be accelerated before elections next year."

Afghans are scheduled to go to the polls to elect a new government in late 2009, but many fear security in the country is two weak to protect voters against Taliban and other insurgent violence.

The European Union's EUPOL police mission in Afghanistan currently numbers 177 international and 91 local staff members. In May, the bloc promised roughly to double the size of that operation to 400 personnel.

The EU's special representative to Afghanistan, Ettore Sequi, said Atmar was right to call for quicker implementation of the EU's pledge.

"The doubling of the mission has been decided and we need to accelerate this deployment," Sequi said.

But even a one hundred percent increase in the number of European security instructors may fall far short of what Afghanistan needs to keep the peace and preserve its fledgling democracy.

Amidst complaint that corruption is rampant within Afghan police forces, US officials have estimated that as many as 5000 instructors might be needed to establish lasting security in Afghanistan.

As the demands placed on the German military in Afghanistan increase, the defense ministry is considering tripling the number of troops participating in rapid response teams, according to media reports. (06.12.2008)

At a meeting of foreign ministers of NATO states in Brussels, the military alliance said it would commit more troops to Afghanistan. And that was just one of the issues on the agenda at a very busy conference. (03.12.2008)

Two Afghan civilians were killed Sunday, Nov. 30, by a suicide bomber who had strapped explosives to his body to target the vehicle of the German military attache, police said. (30.11.2008)