The European Union is stepping up its anti-smoking campaign with television advertisements aiming to ridicule the habit, its executive arm said on Thursday. 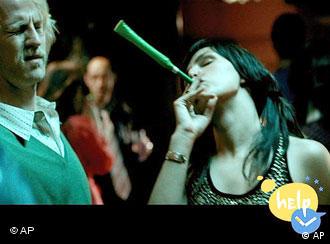 The EU-wide advertisements will show people in everyday situations blowing party whistles rather than smoking. The two-leg campaign, called "HELP -- for a life without tobacco," will be broadcast in early June and again in September. The ads are aimed at viewers under 30.

"These adverts aim to turn the tables on the tobacco industry by showing that tobacco is not cool, glamorous -- or even normal," said EU Health Commissioner Markos Kyprianou in a statement. "By using humor, the campaign seeks to highlight how ridiculous smoking really is, while sending a serious message that people can get help to lead a life without tobacco," he added.

In the ads, cigarettes are replaced by party whistles. One spot focuses on passive smoking at a party (photo, above), another takes place in a school toilet (photo, below), and a third shows a frustrated smoker at work. 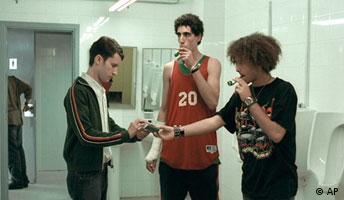 Over the next four years, the EU is set to spend €72 million euros ($90 million) on the campaign. In Germany, the ads will be aired on N24, Pro7, Kabel 1 and Sat1, all commercial channels.

The EU is stepping up its anti-smoking drive to mark United Nations World No Tobacco Day on May 31.

Moving to protect non-smokers in Germany, the federal government and the country's association of hotels and restaurants have signed an agreement which obliges owners to create non-smoking sections for their customers. (March 4, 2005)

Italy and Ireland have banned cigarettes from public places. Most other countries use taxes as a way to discourage smoking. Now German officials have come up with another method to reduce the number of smokers. (May 18, 2005)

The EU has unveiled a new anti-smoking campaign that calls on governments to print hard-hitting images on cigarette packs to show the damage smoking can do to people's health. It's hoped to scare smokers into quitting. (Oct. 23, 2004)

HELP - for a life without tobacco

Watch the ads on the EU campaign's Web site