The EU has unveiled a new anti-smoking campaign that calls on governments to print hard-hitting images on cigarette packs to show the damage smoking can do to people's health. It's hoped to scare smokers into quitting. 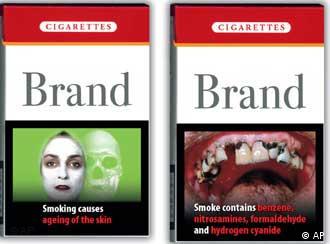 The outgoing European Commission this week resorted to drastic measures to curb smoking which, according to the EU executive, accounts for over 650,000 deaths a year in the 25-nation bloc. 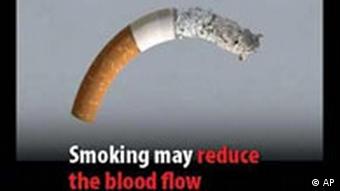 An example of the EU Commission's latest anti-smoking campaign.

The anti-smoking campaign involves putting graphic images of the health consequences of smoking on cigarette packs. The series of 42 images includes rotten lungs, decayed teeth, a corpse, a baby with an oxygen mask and gory details of a man with a cancerous tumor on his throat.

Shocking people out of complacency

Unveiling the campaign in Brussels on Friday, David Byrne, EU Commissioner for Health and Consumer Protection, said the aim was to frighten people into kicking the habit. "People need to be shocked out of their complacency about tobacco," Byrne said. "I make no apology for some of the pictures we are using." 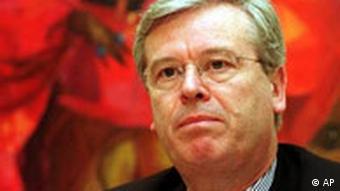 David Byrne, the EU Commisioner for Consumer and Health Protection.

He added that part of the idea was to debunk the myth that smoking is cool. "The true face of smoking is disease, death and horror -- not the glamour and sophistication the pushers in the tobacco industry try to portray," Byrne said. "The EU must hammer home this message to young people via its media campaign and to smokers via their cigarette packs."

The EU said that a study of smoking trends in Canada, which introduced picture warnings several years ago, suggests they can help reduce smoking.

The initiative is just the latest in a string of measures the EU has taken in recent years to push smokers, especially teenagers, to kick the habit permanently. 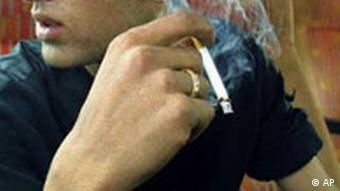 Since 2002, the EU has tried to reach young smokers via its campaign "Feel Free to Say No", which involves snazzy video clips and newspaper advertisements featuring well-known musicians and athletes.

According to Byrne, an increasing number of children, teenagers and women in Europe are turning into smokers. "The number of smokers, particularly teenagers and women, is rising in most countries," he said. "That is a very worrying trend for the future." Experts estimate the annual cost of tobacco-related disease in the EU at €100 billion a year.

Since Sept. 30, 2003, the EU's Tobacco Products Directive have also made it mandatory for EU member states to print large black and white explicit health warnings such as "Smoking Kills" and "Smoking Makes you Impotent" on cigarette packs.

Most EU member states have so far introduced anti-smoking measures in some form or the other. Tobacco advertising is limited in most EU nations and is completely banned in a few others. 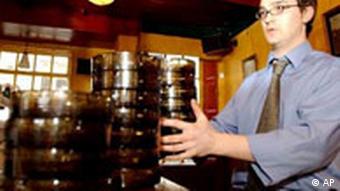 Ross Heffernan, a barman at Kehoe's Lounge Bar in Dublin, stacks ashtrays to be put away as the No Smoking ban in pubs, restaurants and the work place came into effect in Ireland in March, 2004.

In March, Ireland became the first country to ban smoking in restaurants, bars and pubs. Norway and Malta have since instituted similar prohibitions and Sweden is on the way.

The European Commission on Friday also called on member states to implement long-term measures, such as effective regulators, to tackle smoking levels. It said that Ireland and Belgium had already shown interest in passing national laws to implement the graphic picture warnings next year. 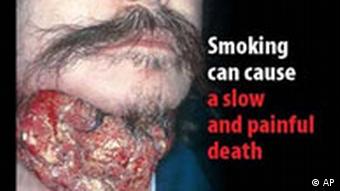 A grisly example of the EU's anti-smoking campaign

The latest pictorial health warnings are not binding on member states. Individual countries can decide on whether they want to implement them.

On Friday, Germany, which was sharply rebuked earlier this month for its weak implementation of anti-smoking measures in a Europe-wide study carried out the European Network for Smoking Prevention, said it will examine whether to introduce the pictorial health warnings.

Federal Drugs Commissioner Marion Caspers-Merk at the same time pointed out that government efforts to curb smoking among younger people were working. Caspers-Merk told news agency dpa that the smoking rate among people up to the age of 18 had fallen to 23 percent from 27 percent within three years.

Critics of the pictorial warning campaign say it singles out smokers and is offensive. "Smokers are well aware of the health risks of smoking.

There's no need to rub their noses in it," Simon Clark, director of British smokers' lobby group Forest told Reuters. "All that is needed is a simple written warning."

He added: "What about fatty foods, dairy products or alcohol? If they're going to target tobacco, there should be written and graphic health warnings on other products as well."

A Europe-wide study of anti-smoking policies due out Tuesday will criticize Germany's weak efforts to curb the habit. But Iceland and Britain are in for praise. (Oct. 11, 2004)

Young Germans and Their Vices

The traditional German pastimes of boozing and smoking are no longer just the preserve of the working man. Instead they have become the pleasure of an alarming percentage of the nation's youth. (Aug. 26, 2004)

A series of anti-smoking measures have initiated a sea change in smoking attitudes in Germany. But much more work is to be done, and companies are starting to take matters into their own hands. (Oct. 19, 2004)