The European Commission launched a probe into claims that Germany's Lufthansa may not be paying enough for Austrian Airlines in its bid to create Europe's largest carrier. 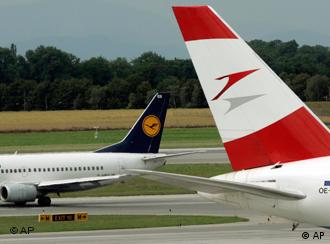 The European Union executive in Brussels expressed "doubts that the price to be paid by Lufthansa (for Austrian Airlines) reflects the market price for what is being sold," according to a statement issued Wednesday, Feb. 11.

The commission said it was also worried that the sale had not been "truly open, transparent and unconditional" and questioned whether the state "really acted as a market economy investor".

In return, the Austrian government agreed to take over 500 million euros of the airline's debts, which total 900 million euros. If approved, the deal would create Europe's largest airline in terms of passenger numbers, slightly ahead of French-Dutch carrier Air France-KLM.

However, if the commission rejects the takeover, Austrian Airlines would have to be downsized significantly, the state holding's chief executive, Peter Michaelis, said last week.

The commission's main concern is that the Austrian government's terms may have been too generous. It also has doubts as to whether the restructuring plan submitted by Austria "will restore the long-term viability of the company in the shortest possible time and without the need for additional aid in the future."

Reacting to the news, Austrian Vice Chancellor and Finance Minister Josef Proell said the government would do "everything to clear up these issues and to dispel concerns with our arguments, so that Austrian Airlines, Lufthansa and OeIAG can implement the transaction."

To fend off insolvency, Austria's ailing flag carrier announced a package of cost-saving measures at the end of January. These include a cut in the number of flights and the suspension of contributions paid into its workers' pension fund.

German airline Lufthansa has confirmed it's been in talks with its ailing Scandavanian counterpart SAS, prompting a surge in SAS shares on Friday. (02.01.2009)

Lufthansa Takes Germanwings Under Its Wing

No-frills airline Germanwings will become a direct subsidiary of airline giant Lufthansa from 2009, moving away from regional carrier Eurowings. The move is expected to enable the charter company to grow even further. (09.12.2008)