EU slams Iran′s jamming of satellite signals as ′unacceptable′ | Europe | News and current affairs from around the continent | DW | 22.03.2010

European Union foreign ministers have urged Iran to stop jamming satellite signals that have affected transmissions by several Western broadcasters, including Deutsche Welle and the BBC. 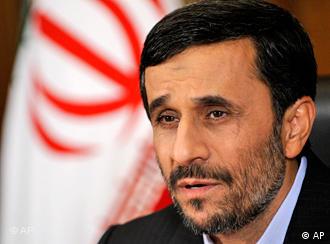 The West is losing patience with the regime in Tehran

EU foreign ministers have issued a statement demanding an end to Iran's state censorship. They condemned the country for jamming the satellite signals of a number of major European broadcasters, including those of Deutsche Welle.

Ministers called the jamming "unacceptable" and called for an immediate end to the interference.

"The EU is determined to pursue these issues and to act with a view to put an end to this unacceptable situation," the statement reads.

Almost 70 radio and television stations that transmit via the Eutelsat satellite to Iran were jammed on February 11, the 31st anniversary of the Islamic Revolution.

The EU's condemnation comes a day after Iran's Supreme Leader, Ayatollah Ali Khamenei, launched a fierce attack on the US and other Western countries in his address to the nation. Khamenei accused the West of supporting and siding with anti-government rioters last year.

Director General Erik Bettermann objects to “Teheran’s repeated interference” and the “limitation of freedom of speech and freedom of the press” (11.02.2010)