EU Poll Names Israel Greatest Threat to World Peace | News and current affairs from Germany and around the world | DW | 04.11.2003

Israel has expressed outrage over an EU poll that said most of the union's citizens see the country as the greatest threat to world peace. The European Commission has distanced itself from the survey. 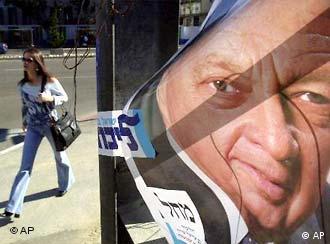 Senior Israeli leaders have condemned the Eurobarometer poll released on Monday that suggested that 59 percent of EU citizens see Israel as a bigger menace to the world than Iran, Iraq or North Korea.

"We are not only sad but outraged. Not at European citizens but at those who are responsible for forming public opinion," Israel's mission to the EU said in a statement.

Israel's minister for Diaspora affairs, Natan Sharansky, said the poll showed that "behind the 'political' criticism of Israel lies nothing but anti-Semitism."

Foreign Minister Silvan Shalom was more moderate in his criticism, saying that the poll results reflected the greater press coverage that Israel receives in comparison to Iran or North Korea. While he asserted that the poll was "conducted in an irresponsible manner and distorts reality," he said it did not prove that Europeans were anti-Semites.

European Union politicians have also expressed surprise and concern about the findings.

The results "point to the continued existence of a bias that must be condemned outright," European Commission President Romano Prodi said in a statement. "To the extent that this may indicate a deeper, more general prejudice against the Jewish world, our repugnance is even more radical."

Prodi stressed that the results of the poll did not reflect the views of the Commission and that they would not effect EU policy in the Middle East.

Italian Prime Minister Silvio Berlusconi, currently head of the EU's rotating presidency said the survey's question had been "misleading." His foreign minister, Franco Frattini, issued a statement to try to calm the furor, saying that the findings related a distorted message.

The Simon Wiesenthal Center, an international Jewish organization that combats anti-Semitism, condemned the results, and said Israel should "draw the only conclusion possible" and exclude the EU from having a role in any peace process.

The survey was carried out in October by EOS Gallup. The pollsters asked 7,515 citizens from the 15 EU member states which countries posed the greatest threat to world peace. In the Netherlands (74 percent), Austria (69 percent) and Germany (65 percent) the largest percentage of people said Israel was a menace. Only Italy broke with the trend with less than half of those polled saying Israel was a threat (48 percent). In second place, after Israel, were Iran, North Korea and the United States, which 53 percent of the EU citizens deemed a threat.

Respondents were not asked whether they viewed the Palestinians as a menace because the poll only referred to states, EU Commission spokesman Gerassimos Thomas said at a press briefing.

Eurobarometer polls are carried out regularly on issues ranging from the common European currency to consumer habits. The survey in question focused on Iraq and international relations.

A day after the UN passed a resolution calling on Israel to stop the construction of a security fence, Israel's foreign minister made his first visit to Germany and defended his country's right to security. (Oct. 22, 2003)

Nearly four weeks after making a speech in which he described Jews as a "race of perpetrators," a German member of parliament faces charges of anti-Semitism from the Jewish community. (Nov. 1, 2003)