EU foreign ministers agreed Saturday to fully support a renewed Arab-led Middle East peace initiative and to work with the non-Hamas members of the new Palestinian government, an official said. 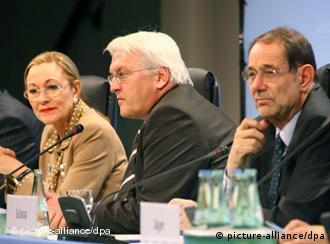 The EU's top diplomats are in agreement: (from left) Ferrero-Waldner, Steinmeier, Solana

"There is full support for the Riyadh consensus," said a spokeswoman for EU foreign policy chief Javier Solana, referring to the agreement reached by the Arab League in Saudi Arabia this week to revive a five-year-old Middle East peace plan.

"The EU will continue to be extremely proactive to ensure that this window of opportunity is not missed."

The ministers meeting in Bremen, Germany, also supported a call by Solana to organize meetings between the international Quartet on the Middle East -- the EU, UN, US and Russia -- and the Arab Quartet of Egypt, Saudi Arabia, the United Arab Emirates and Jordan, the spokeswoman said.

Ministers voiced optimism at their first get-together since the Riyadh deal, which has been rejected by Israel in its current form.

"I take some confidence from the fact that the meeting of the Arab League not only took place and showed some result but was also received with a cautious response on the part of the Israeli government," German Foreign Minister Frank-Walter Steinmeier, presiding over the Bremen meeting, told reporters.

Luxembourg Foreign Minister Jean Asselborn said the Arab initiative and the formation of the Palestinian unity government were positive moves which lent the possibility of encouraging Israel "to take seriously the hand extended by the Arabs."

The Arab blueprint offers Israel full normalization of relations if it withdraws from all land occupied in the 1967 war and allows the creation of a Palestinian state and the return of Palestinian refugees. 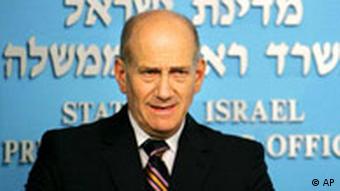 Olmert appears to see the possibility of peace

Though Israel rejected the plan, Prime Minister Ehud Olmert said in interviews published Friday that the Jewish state could clinch global peace with its enemies within five years.

On the final day of their meeting, the EU ministers were briefed by Solana on his discussions at the Arab League summit.

The EU ministers also discussed how to deal with the new Palestinian government, which includes ministers from the militant Muslim Hamas and the moderate Fatah groups.

So far the unity government has not accepted the conditions fixed by the international Quartet for full renewed engagement -- renunciation of violence, recognition of Israel and abiding by past agreements.

Solana, who hailed a "new Arab consensus," set the tone for relations with the Palestinian unity government by talking in Riyadh to the non-Hamas president, Mahmud Abbas, and foreign minister, Ziad Abu Amr, but not the Hamas prime minister, Ismail Haniya. 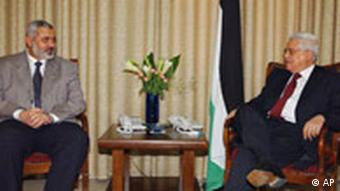 The EU will deal with Abbas(right), but not Haniyah (left)

His spokeswoman said the EU had agreed it would work "with the members of the government which are not Hamas, in particular Abbas, Abu Amr and the finance minister."

Like the United States, the EU considers Hamas a terrorist organization and boycotted the Hamas-led Palestinian administration which preceded the unity government.

The EU ministers will also be discussing how to continue sending aid to the Palestinians without dealing directly with Hamas as well as a possible restructuring of the temporary mechanism to aid "institution building" in the Palestinian territories rather than simple social welfare aid.

As the ministers met, German Chancellor Angela Merkel began a trip to Jordan, Israel, Lebanon and the Palestinian territories.

She said the Arab League agreement had "created a lot of movement."

However, EU diplomats warn that the Palestinian refugee issue remains one serious stumbling block to peace.

Almost 4.5 million Palestinian refugees and their descendants live today in dozens of refugee camps across the Middle East in precarious conditions.

Israel vehemently rejects any suggestions of the refugees being allowed to return, arguing that the influx would effectively erase the Jewish character of the state.

Merkel Embarks on Middle East Visit Amid Signs of Hope

Angela Merkel leaves Saturday on a Mideast trip and plans to visit Jordan, Israel, the Palestinian territories and Lebanon. She hopes to encourage Israelis and Palestinians to intensify their recently restarted dialog. (31.03.2007)

Assad Blames Israel for Tensions as Steinmeier Pushes for Peace

German Foreign Minister Frank-Walter Steinmeier met with President Assad in Damascus and urged the Syrian leader to engage in the peace process. But Assad held a belligerent stance, blaming Israel for current tensions. (04.12.2006)