EU Kosovo Mission Put Back Amidst Pristina Protests | Europe | News and current affairs from around the continent | DW | 02.12.2008

The transfer of security duties from the UN to the European Union was supposed to demonstrate the bloc's involvement and bolster peace in Kosovo. But no one seems very happy with what's become a mission of compromises. 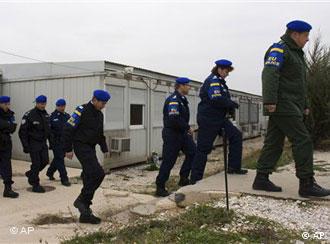 Eulex troops were supposed to start taking over maintaining security in Kosovo from UN forces on Tuesday, Dec. 2, but that start has been delayed a week.

"We are ready, but there is some fine tuning to be settled first," Eulex spokesman Viktor Reuter told the dpa news agency in the Kosovan capital Pristina. The mission, which would see some 2,000 police officers and officials help Kosovo keep law and order, is now set to commence on Dec. 9.

The "fine tuning" refers to the implementation of a six-point plan announced last week by the United Nations and is aimed at opposition to the mission by Serbia, which claims Kosovo as part of its territory.

In the aftermath of the 1990s Balkans Wars, Kosovo -- the majority of whose inhabitants are ethnic Albanians -- was put under UN administration. In February of this year, the Assembly of Kosovo declared its independence from Serbia.

More than 50 countries, including the US, Britain and Germany, recognized Kosovo as a sovereign state, but the move angered Serbia and Belgrade's main ally Russia.

According the six-point plan, the UN would retain control over Mitrovica and other northern regions of Kosovo that border or are near Serbia. But that compromise has, in turn, upset ethnic Albanians. 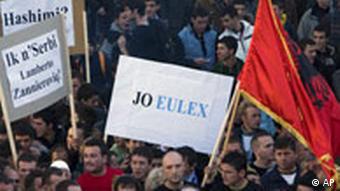 Thousands of ethnic Albanians took to the streets of the Kosovan capital Pristina on Tuesday to protest against what they fear amounts to the division of Kosovo.

Those sentiments echoed a statement made by Kosovo's prime minister, Hashim Thaci, the day before.

"The mission will only be meaningful if from day one it is also installed in the northern Mitrovica," Thaci said.

Meanwhile Belgrade is lobbying NATO to lift a buffer zone, agreed upon in 1999, that prohibits the Serbian military from the immediate vicinity of the Serbia-Kosovo border.

Germany criticized Kosovo on Monday, Dec. 1, for detaining three of its intelligence agents for more than a week, but said it was not planning to cut back aid to the tiny Balkan state. (01.12.2008)

Three German intelligence agents who were accused of bombing an EU office in Kosovo have returned to Germany. A judge in Pristina said there was no evidence connecting them with the incident. (30.11.2008)