Medecins Sans Frontieres (MSF) in Greece has called for the EU and Greece "to stop shirking their responsibility" when it comes to migrants and take into account the human cost of migration policies across the region. 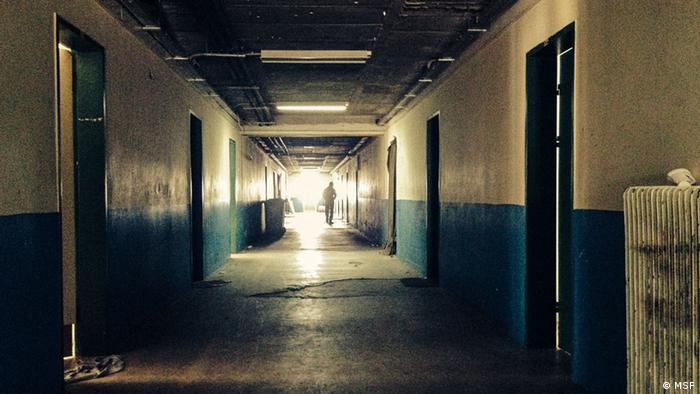 "Detention has a severe impact on both [the] physical and mental health [of migrants]" states Aliki Meimaridou, a psychologist working with Medecins Sans Frontieres (MSF) in Greece. "But for me its greatest consequence is the sense of futility, the absence of all hope for the future. These people feel their lives have ended here," she continues.

The Doctors Without Borders psychologist recalls an incident which sums up this sense of futility, one which Meimaridou cannot erase easily from her mind. "One thing I think I'll never forget and that's indicative of these people's despair is those who threaten to jump off the roof as a means of demanding their rights. On some occasions, they do jump. We experienced such an incident and I'll never forget the people on the roof shouting and voicing their disappointment and then, the sound their body made when it crashed to the ground. It's something I'd never heard before and it will remain etched on my mind forever - the sound the human body makes when it crashes to the ground." 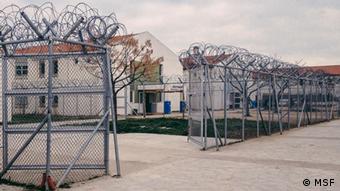 Meimaridou is just one of the MSF workers, doctors and psychologists, who bear witness to the so called "silent" or "invisible" suffering of illegal migrants held in detention on Greek soil. The men, women and children come from all over the world. Many of them have no proof of age, identity or address and for that they are rounded up and put in detention centers; many for up to 18 months. MSF this week (Wednesday April 2) denounced what is going on in Greece, calling for the government and the EU to do something about the unsanitary conditions in which many migrants are kept.

Panagiotis Tziavas is a medical doctor who works with MSF in many of the detention centers. MSF has been providing medical and humanitarian assistance to migrants and asylum seekers in Greece since 1996. The report was based on regular assessments in three pre-removal centers and four police and border police stations in Northern Greece, as well as a further 27 facilities across the country in 2013 and 2014. 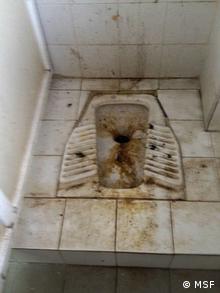 Migrants have to walk through waste and excrement in order to take a shower in some detention centers.

Despite the amount of exposure that many MSF workers have to conditions in these centers, Dr Tziavas said he was "shocked" at the conditions he witnessed. He testified that "too many people were crammed into a very small area." But for him, the biggest problem was the sanitary conditions.

He explains, "most of the latrines were in a really deplorable state. A typical example was the detention center in Komotini where the latrines on the lower floor lacked sewage pipes resulting in the waste and excrement from the upper floor being siphoned to the lower floor through trash bags and from there to the main sewage system of the buildings."

The consequences he explained are "tragic, because these people are forced to walk through the waste and excrement of the people from the upper floor in order to take a shower or go to the toilet. Not only is it a tragically disgusting sight, but it also poses a serious threat…to the health of the people there in terms of transmitting diseases and infections." Needless to say, "this is a very serious danger".

Something needs to be done

Ioanna Kotsioni is a migrant referent with MSF. She told DW that "the situation varies, but overall we're talking about substandard conditions." She lists failures to apply basic hygiene, or even provide migrants with soap or clean clothes or bedding as contributing to the overall situation. The report goes on to list the incidence of migrants sharing razors to shave as there were too few to go around, leading to the possibility of increased transmission of diseases like HIV and Hepatitis B and C which are transmitted via blood or feces.

At a later stage, the report notes that the humidity levels are so high in some of the camps that migrants regularly sleep on damp or wet bedding. The total lack of hygiene has led to several outbreaks of scabies and some incidences of TB. Kotsioni underlines that cases of tuberculosis have so far been isolated, but that diseases like scabies are totally preventable if basic hygiene rules are observed.

Kotsioni went on to explain that the detention of migrants, including those who should be regarded as vulnerable, and minors, had increased significantly so the problems that MSF has noted for years have suddenly got much worse. She explained to DW that much of the EU money earmarked to deal with the problem of migrants who arrive on Greek soil has gone to expanding the capacity of detention centers instead of improving conditions or building more open centers. 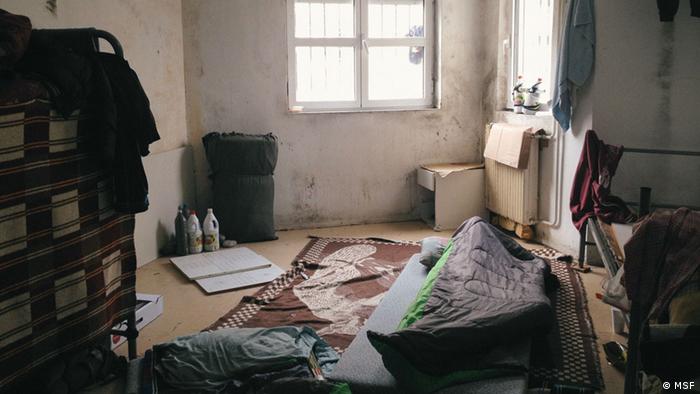 Many migrants sleep on damp or wet sheets. Scabies outbreaks are rife.

One 16 year old boy who has already spent 6 months in detention testifies in the report that "Some months ago I asked to be released, because I am a minor. I asked many times but they always refused. I got extremely anxious and was thinking about my family, [about whom I] have [no] information. Since they didn't want to release me, I thought it was better to jump off the roof than stay here. I broke my legs. Now I still have pain in my legs and when I eat, my teeth are hurting because I hit them against a wall when I jumped."

According to MSF, his story is not uncommon. Many migrants have no way of proving their age and the authorities often register them as adults even when they are not. Some, believing they will be treated better as an adult also lie about their age initially. 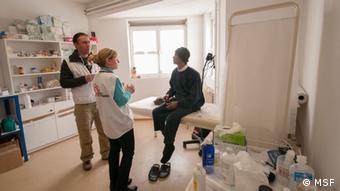 The psychological effects of detention on migrants are plain to see. Weight loss and insomnia are common.

MSF notes that many migrants in detention have little or no acces to daylight for months on end. A 34 year old man who has spent 17 months in detention explained that "The first time I stayed for one year in the detention center. When I left, I was free for about 40 days, but I didn't get the chance to figure out what I was going to do, I didn't know how the system works." So he ended up back in detention, despite having already applied for asylum in Italy where he first entered Europe from Libya.

Originally from North Darfur, he had come to Greece to work as a blacksmith. On trying to leave the country he claims he was arrested and put in jail for 37 more days. The beatings, he claims, "were constant. Eventually I woke up in hospital. I was unconscious for three days. […] The way we live here is not like a detention center. […] It smells like a pigsty. […] Now I'm starting to have psychological issues. I am beginning to have insomnia. I was 72 kg now I am down to 64kg. I cannot express in words the situation we are in."

What could be done?

Ioanna Kotsioni, MSF Greece, explains that while money might come in from the EU and Greece to deal with this situation, the problem is the attitude in society and among the decision-makers, that many just ignore what is going on under their noses. "While migrants are seen as a problem, the human cost that migration policies inflict is being ignored." She believes that it all comes down to a question of priorities.

In conclusion, MSF urges the Greek authorities to invest in a proper reception system and to guarantee uninterrupted access to healthcare services. The NGO wants to make sure that migrants are properly assessed and that vulnerable people and minors are never placed in detention centers in the first place. They also want inappropriate centers such as Komotini to be shut down if they can't provide basic standards of hygiene and care.

They call the whole situation a "common responsibility and a shared shame," something which Greece and the EU cannot continue to shirk and ignore. "What is needed is for everyone to face up to the human cost of the restrictive immigration policies which are currently in place," and to bear witness to the scale of the human suffering inflicted on already vulnerable and displaced people.

Helen Seeney contributed to this report by interviewing Ioanna Kotsioni for Inside Europe on DW.