EU Gives 9 Million Euros to Zimbabwe Against Cholera | Europe| News and current affairs from around the continent | DW | 02.12.2008

The European Commission said Tuesday it was providing 9 million euros ($11.4 million) in funds to help Zimbabwe deal with a cholera outbreak that has claimed nearly 500 lives so far. 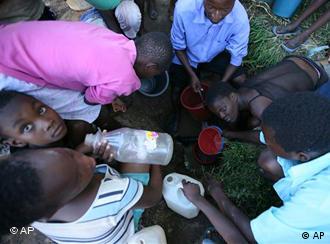 Water supplies have been cut in Harare

Officials in Brussels said the money would be given to UN and non-governmental agencies working in Zimbabwe to support water, sanitation and hygiene programmes, epidemic response and the provision of essential drugs.

"I'm shocked at the deteriorating humanitarian crisis in Zimbabwe and call upon the authorities there to respond quickly to this cholera outbreak by allowing full assistance from international humanitarians and regional partners," said Louis Michel, the EU commissioner responsible for the bloc's humanitarian aid.

The European Commission says it is the main donor to the vulnerable populations of Zimbabwe, having provided more than 500 million euros in direct support to the population since 2002.

On Monday, authorities in Zimbabwe shut down water supplies for Harare's estimated 2 million residents because purification chemicals had run out.

Shocking new statistics show that Zimbabwe's hyperinflation has reached the 11 million percent mark in June. Some say the actual figure is even higher. (19.08.2008)

South Africa and the European Union Friday, July 25 began their first ever summit in the French city of Bordeaux with Pretoria set to defend and jealously guard its mediating role in Zimbabwe. (25.07.2008)