EU Calls for Ceasefire as Casualty Numbers Rise in Gaza | Europe | News and current affairs from around the continent | DW | 27.12.2008

EU Calls for Ceasefire as Casualty Numbers Rise in Gaza

The EU has called for an immediate ceasefire in the Gaza Strip. Surprise airstrikes and artillery fire by the Israeli military directed at Palestinian militants have claimed some 155 lives, reports say. 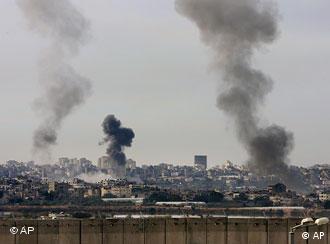 The French presidency of the European Union and the office of the EU's foreign policy chief called for an immediate ceasefire in Gaza.

"We are very concerned at the events in Gaza. We call for an immediate ceasefire and urge everybody to exert maximum restraint," a spokesman for European Union foreign policy chief Javier Solana said.

"Everything must be done to renew the truce," he added.

Columns of black smoke could be seen rising from locations across the territory on Saturday, and artillery fire was reported against Palestinian militants firing rockets into Israel.

"This is only just the beginning of an operation launched after a security cabinet decision. It could take time. We have not fixed a timeline and we will act according to the situation on the ground," he said.

Hamas has vowed to avenge what it called "the Israeli slaughter."

Arabic television station al-Jazeera broadcast pictures showing the motionless bodies of a number of young men lying on the ground in Gaza. Footage showed the wounded and dead being carried away by rescuers. There was widespread damage to buildings. 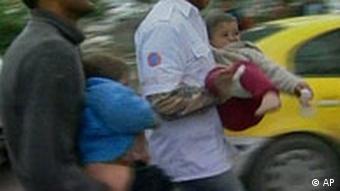 Medics and witnesses are reporting at least 155 people have been killed in the bloodiest day for Palestinians in more than 20 years.

Among the dead was the Gaza police chief, Maj. Gen. Tawfiq Jaber, witnesses told reporters. He was in a police compound in Gaza City that had been hosting a graduation ceremony for new personnel when it was attacked.

Airstrikes also paralyzed the mobile telecommunications network in the territory.

The attacks, although an expected response to a wave of rocket fire by the military associates of the Islamist Hamas movement that has ruled Gaza since the end of a ceasefire on Dec. 19, came as a surprise on Saturday, as previous Israeli media reports had not expected a decision to strike before Sunday. 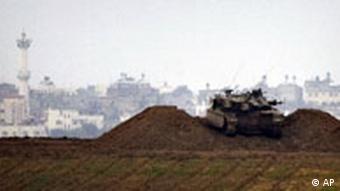 In the days before the airstrikes, Israel beefed up its military presence near its border with Gaza

Witnesses said that Israeli artillery fire struck at Palestinian militants who had fired rockets into Israel west of the town of Beit Lahiya, in the north of the Gaza Strip.

"We are facing a period that will not be simple or easy," an aide to Defense Minister Ehud Barak told Reuters.

Arab foreign ministers will meet in Cairo on Sunday or Monday to take a common position on Israeli raids, the head of the Arab League said on Saturday.

European Union foreign ministers announced this week they planned to step up relations with Israel, but remained adamant Jerusalem must forge closer ties with Palestine and other Arab states. (13.12.2008)

Wrapping up a briefing to the sponsors of the Israeli-Palestinian peace process, Palestinian President Mahmoud Abbas and Israeli Foreign Minister Tzipi Livni said Sunday, November 9 they will keep negotiating. (09.11.2008)