Estonians Ready for Battle in Afghanistan′s ″Hell Land″ | Europe | News and current affairs from around the continent | DW | 01.06.2008

Estonia's unit in Afghanistan may be small, but it's already seen plenty of action and suffered several casualties. As a new member of NATO, it feels responsible to the military alliance. 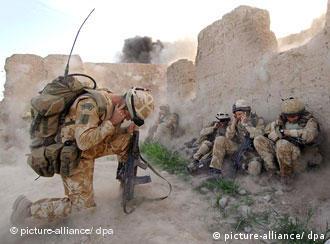 The desert landscape shudders to explosions of mortar and rocket shells, small arms fire and grenade blasts as the Estonian troops stage final battle rehearsals before the real thing.

By mid-morning the mercury rises to 40 degrees Celsius (104 degrees Fahrenheit) and the men are caked with dust and sweat as they manoeuvre and shoot, again and again.

Gulping water from his backpack between compound clearance drills, machine-gunner Raul Pargma, 23, downplays the hardships at the start of a six-month tour in Helmand, dubbed "Hell Land" by British forces that lead the fight against Taliban insurgents in the southern Afghan province: "I like it here, I feel I'm useful for my country, NATO, my unit," he says.

It's a typically upbeat response among the newly arrived company of 105 men which will shortly deploy from Camp Bastion, the main British base in Helmand, 60 kilometers (37 miles) north to the district center of Now Zad.

Once home to some 10,000 people, today it is a ghost town inhabited by stray dogs and coyotes after residents fled from the fighting. Apart from the security forces, the only visitors are militants who plant booby-traps in the deserted streets and houses.

But the area remains a key transit location for enemy units moving to engage the British in Musa Qala, located 30 kilometers to the east, and south to the Sangin Valley. 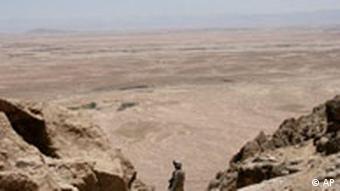 It's easy to see why they call it Hell Land

The Estonians are not green to the task ahead. Around half of the new company, EstCoy-6, has already done tours in Helmand since the former Soviet Baltic republic of 1.3 million inhabitants volunteered troops for the NATO expansion drive into the Taliban heartlands in the spring of 2006.

Although Estonia fields one of the smaller contingents among the 40 countries of the International Security Assistance Force (ISAF) in Afghanistan -- 140 personnel in total -- its soldiers have seen some of the heaviest fighting.

Twenty-five were injured and two men died in a rocket attack last June in Sangin; one was killed in a vehicle maintenance accident days before the move to Now Zad.

"Because we are small we don't just want to stay somewhere peaceful and where nothing happens," said the contingent's public affairs officer, Captain Georgi Kokoshinski. "We can't provide big units but we choose places where we can really do something."

"You don't get experience sitting in a camp," adds the company commander, Major Ain Tiidrus, as he oversees anti-ambush drills.

Others unwilling to enter hot spots

Meanwhile, there is mounting criticism in military and diplomatic circles of NATO members like Germany, Spain and France which refuse to send their troops south from the relatively stable North and West where they can afford to focus on reconstruction rather than fighting.

By imposing numerous conditions on the use of their forces they leave it to Britain, Canada, the US, the Netherlands, Romania, Denmark and Estonia to bear the brunt of the fighting in the volatile South.

"We can ill afford reconstruction armies that cannot handle combat," de Hoop Scheffer said, while US President George W. Bush also urged countries to step up to the plate and fight.

"Like Estonia, member nations must accept difficult assignments if we expect to be successful," Bush said on his way to the summit.

While that country enjoys the good graces of NATO Command and the White House, its public has mixed feelings about the foreign involvement since Estonia was admitted to the military alliance in 2004. The step is widely seen as providing security against potential aggression from neighboring Russia.

In a recent poll of 1,000 citizens that was commissioned by the Estonian Defense Ministry, 73 percent of respondents supported membership of NATO and 50 percent were in favor of participation in international missions.

But support for specific missions was lower: 36 percent backed the continuation of the Estonian mission to Iraq, where two soldiers have been killed, while support for the Afghanistan and Kosovo missions was 35 and 40 percent respectively.

"Most people don't understand that we have a responsibility before NATO," said Lieutenant Andre Austa, 28. "If we want someone to help us we must help them."

For members of the new company, the tour in Afghanistan offers valuable hands-on experience, a substantial combat pay increase and a personal challenge to test their metal in the toughest conditions.

"It was my dream to come here, I wanted to see what it's like, not as it's shown on TV but to see the real war," said Ivan Tsygankov, 29, as he sat in the shade of an armored car parked on the firing range. "But let's see after our first contact [with the enemy] if this is a place I want to be."

And contact is almost guaranteed as Helmand steadily heats up in all respects. The province's massive crop of opium poppies, a chief source of Taliban income, has now been gathered, leaving thousands of young men unemployed and ripe for the insurgents' other seasonal harvest of fighting hands.

German Defense Minister Jung has approved a short-term deployment of 45 German soldiers from their base in northern Afghanistan to the west of the country to help flush out insurgents. (16.05.2008)

Germany's Bundeswehr will have to fight in the more dangerous southern region of Afghanistan in the foreseeable future, according to former Foreign Minister Joschka Fischer. (04.05.2008)

Javier Solana, the European Union's foreign policy chief, reiterated Europe's commitment to "the long haul" in Afghanistan during a visit to Kabul. (21.04.2008)